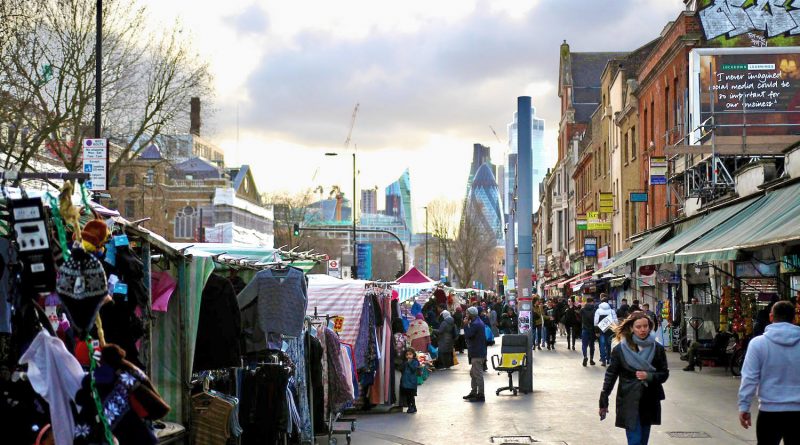 The centuries-old market has been a staple in Whitechapel’s identity. Now, with the opening of the Elizabeth Line in 2022, many more changes await it.

When you think of Whitechapel, you can’t help but visualise Whitechapel Market, which lines the northern pavement and runs every day of the week.

The bank of white market stalls lines Whitechapel Road as far as the eye can see. Starting at the junction with Vallance Road, its stalls stretch out all the way from Cambridge Heath Road, nearly a mile away; 1,288 meters to be precise.

Despite being on the busy A11 out of London, this market has a local feel, much like Watney Market, selling mainly low-cost fresh fruit, exotic vegetables, spices, fashion, cultural wear, and jewellery to local shoppers, Monday through to Saturday.

While not as famous as its sister street markets in the area, including Petticoat Lane Market and Spitalfields Market, Whitechapel Market plays an important role in preserving Whitechapel’s historical identity.

From providing trading opportunities to the Jewish immigrants in the 19th century, and then becoming a staple for the Bengali community from the 1970s and onwards, the market’s significance is deeply embedded within the heritage of the area.

With the imminent opening of the Elizabeth Line and the Council’s new proposals to transform the market, a new era awaits Whitechapel Market.

The history of Whitechapel Market

Uncovering the market’s history takes us back to the development of Whitechapel itself.

Whitechapel was named after the mid-13th century church, St Mary Matfelon. However, due to the white chalk rubble walls of the church, it was commonly referred to as the “White Chapel,” thus birthing the name of the area. The church used to be located where Altab Ali Park now resides, and the original St Mary Matfelon fountain can still be found at the park’s current location.

What came to be known as the Whitechapel area would soon be developed from here, existing as a mediaeval suburb on the eastern fringe of the City of London, along what we now know as Whitechapel Road.

The road follows the section of the historic Roman road, which was created by the Romans during the nearly four centuries (AD 43–410) that Britannia was a province of the Roman Empire.

Said to have been paved from the early 16th century, Whitechapel Road connects Whitechapel High Street to the city on the west side and to Mile End Road on the east side.

In Gascoyne’s map of 1703, it can be seen that there were no buildings surrounding Whitechapel Road. It would take another ten years for developments to be made to garner more traction for the area.

The establishment of the Royal London Hospital in 1750 helped to initiate the growth of commercial and residential uses in Whitechapel.

Over time, suburban development sprang up around the hospital. By the 18th and 19th centuries, the trade and manufacturing industries finally made their way into Whitechapel.

It is unclear to pinpoint when exactly the market was formed, but it was formally established in 1904 through the recognition of the council.

Before this, the trading on the market was informal and undocumented, considered to be tolerated by the Manor of Stepney, which owned the site of the market, which was generally known as Mile End Waste (waste or common manorial land).

It wasn’t until 1904 that the Metropolitan Borough of Stepney decided to take control of the market to regulate the nuisance traders.

By 1909, the Manor of Stepney acquired the strips from Vallance Road to Mile End Gate. Upon its regulation, trading west of Mile End Gate came to be known as the Whitechapel Market.

As Whitechapel saw an influx of ethnic minority communities, they all had an input in the items that were sold on the market. During the 1850s to the 1930s, the road was populated by the Jewish community, who had set up shops and market stalls along the road.

By the mid-20th century, the Jewish communities dispersed from the area, which was now experiencing a transition to becoming a settlement of the British Bangladeshi community. Even now, traders sell a range of authentic Asian food and clothes in the market and on shop fronts. In the 1970s, it was noted for its availability for clothing, jewellery, flowers, second-hand records and hi-fi equipment.

By the 1980s, there were 124 pitches between Vallance Road and Cambridge Heath Road.

As the market plays an integral part in the identity of Whitechapel, the Whitechapel Market Conservation Area was set up in 1997 and extended in 2008 to preserve its historic importance to the area.

The Conservation Area lies between Cambridge Heath Road to the East London Mosque, Davenant Centre to the West, Whitechapel Road to the south and Durward Street to the north.

While its focus lies in protecting the market, the row of buildings adjoining the market also have historical relevance to the area. This includes 18th-century buildings such as the Grade II-listed Woods Buildings and Davenant Centre.

Life continues to pulse through the veins of Whitechapel Market, and if you were to visit it on a weekend you will witness the market clamour at its peak.

As the area’s main local shopping street, the market is thronging with people purchasing their last-minute groceries for a family gathering, buying fabrics at the adjacent storefronts for a special event or picking out some pieces from the jewellery stalls.

The colour of the fruit and vegetable stalls add streaks of colour to an otherwise mostly grey urban backdrop. The smell of new fabric and fresh fish hangs in the air successfully masking any fumes from the busy dual carriageway.

Visiting one stall is not enough. To get the full market experience you must make your way through the countless striped market tents. People continue from stall to stall, with their hands becoming fuller with shopping bags as they make their pitstops at the variety of items being sold.

On your trek from the eastern front toward the western side, you will come across Whitechapel Station, which acts as another gateway to welcome more people to the bustling spirit of the market.

Ahead of Bangladesh Independence Day on 26th March, Whitechapel Station unveiled the Bengali signage of the station’s name besides its English signboard. It was announced to honour the British-Bangladeshi community within the borough for their continued contribution to the borough.

The future of Whitechapel Market

Whitechapel Road is experiencing a rapid transformation with the arrival of the Elizabeth Line, the council’s new Town Hall directly opposite the tube, and other forthcoming investments.

In October 2021 it was announced that the Council’s bid for £9.3m of funding from the government’s Levelling Up Fund would support the delivery of a renewal project.

The proposed changes range from new market stalls to support a better trading and shopping environment. Changes to the infrastructure of the road will also be made to improve pavements, street lighting, with added green spaces, street furniture and an improved waste management system.

The changes are said to bring in new improvements, such as more communal seating, less street clutter, and better-quality pavements, with keeping the conservation area in mind.

Greig & Stephenson Architects has proposed three types of stalls that will support traders to improve their businesses and improve the shopping environment.

The new market stalls will provide protection from the wind and rain, an innovative on-street storage solution to reduce the time taken for traders to set up their stalls, as well as incorporate new power and lighting to improve the shopping environment and out of hours use.

However, some say the planned improvements will negatively impact the historic fabric of the conservation area. Playing a pivotal role in Whitechapel’s identity, will the sanitisation of Whitechapel Market detract from its appeal and the wider identity of Whitechapel?

If you enjoyed this article you may also like to read Watney Market and its Troubled History.