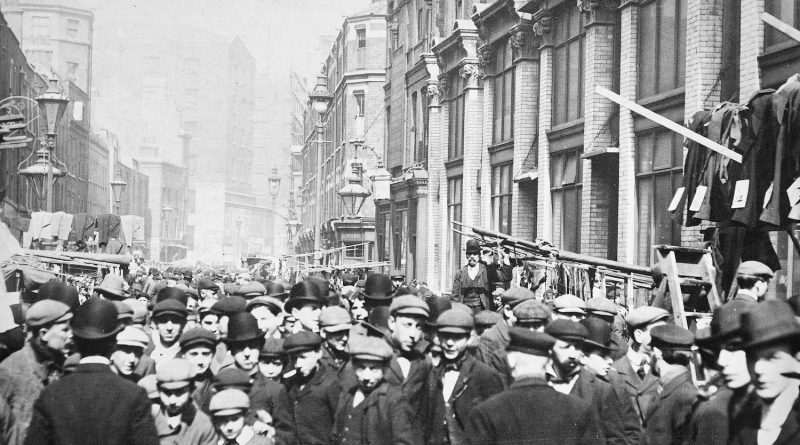 From the Tudor Times to the bombing of World War II, this is the story of Petticoat Lane Market’s refusal to disappear into history.

Markets are one of Whitechapel’s defining characteristics. From the high street market, Watney Market, to Petticoat Lane Market, this is one of the few remaining corners of London that are a boon for bargain hunters.

But if you’re looking for a street called Petticoat Lane, you won’t find it. The market has undergone many phases and names with the cultural shift of the eras, changing with the times to survive. It is currently unofficially referred to as ‘Petticoat Lane Market’ even though this name was dropped during Victorian.

Where is Petticoat Lane Market?

This is thought to have been because of the influence of the local Jewish community that frequented the market at one point in its history. Religiously, Saturday is the day of Sabbath for Jewish people, leaving Sunday available to complete shopping duties.

The majority of the market exists within the Tower Hamlets area with Middlesex Street only in the City area. It contains over 1,000 stalls, selling goods ranging from fashion, textile, household goods, Asian and African fabric shops, and many, many more. Most popularly, it is notable for its sale of leather goods near the Aldgate East area of the stalls.

Petticoat Lane Market is also where Lord Alan Sugar began his empire to become one of the UK’s wealthiest and most famous businessmen. Being from the East End himself, he used to have a stall holder in the market.

Why is it called Petticoat Lane Market?

While Petticoat Lane Market has existed in the same location for a few centuries, it underwent several name changes that reflected its context and time period.

The market was first known as Hogs Lane in the Tudor Times, which spans around the years 1485-1608. This is due to its initial rural sale of goods such as pigs and other livestock. As the years went by, this rural nature changed as cottages surfaced by the city walls in the 1590s.

It wasn’t until the early 1600s where the ‘Petticoat Lane’ name was coined, named after the street it was on. By this time, the area became a commercial district where second-hand clothes and bric-à-brac (miscellaneous objects and ornaments of little value) goods were sold and exchanged.

One theory is that the name of the market comes from a tale that referred to petticoats as a lady’s undergarments. It was claimed that “they would steal your petticoat at one end of the market and sell it back to you at the other,” reflecting the bustling nature of the market.

This history of Petticoat Lane Market

As it attracted many customers, Petticoat Lane was severely affected by the Great Plague of 1665, a time when London lost a fifth of its population.

Its reputation of being known as a hub for the sale of fashion goods began in the 17th century with the arrival of the Huguenots (French Protestants). Many of them were known to be weavers, using their expertise to increase the sale of clothes as part of the market.

By the mid-18th century, Petticoat Lane Market was established as the go-to area for the manufacturing of clothes, as its goods became more needed for the City.

The market’s name officially changed to Middlesex Street in the 1830s as the Victorians were displeased with the reference the term ‘petticoat’ had to undergarments. At the time, Christianity was very prevalent within social and political life. As a result, the term was perceived to be too racy and required change.

As the century came to a close, the area experienced a growth in Jewish immigrants who were fleeing persecution in eastern Europe. Becoming an addition to the market’s services they maintained the traditions of the market. Their presence declined during the damage caused to the East End during the Blitz and the bombing in World War II, as did the market.

Just before the wartime period, the Petticoat Lane market developed somewhat of a bad reputation. It experienced a time where some stalls sold illegal goods. Police cars and fire engines frequented the area with the intention of disrupting the market.

It was not officially recognised as a market until an Act of Parliament in 1936 – only five centuries later, no big deal.

After this period, the market’s ventures turned back to good fortune. At the beginning of the 1970s, the new wave of immigration from India and East Asia helped the market continue to prosper and grow into the shopping hub and attraction it is today.

Petticoat Lane Market continues to attract many visitors today. Having become one of the East End’s historical treasures, it attracts tourists from all over the world.

If you enjoyed this article you may also like to read a tour of notable Whitechapel mosques.