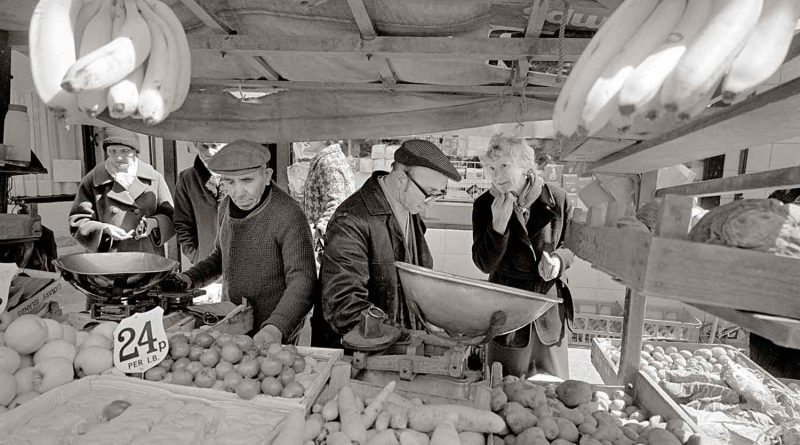 Walking through Watney Market, you might not believe that it’s been a staple of the Whitechapel community for 140 years. It’s troubled history involves wartime struggle, years of redevelopment and one very popular supermarket chain. But when it first hosted a trading community in the early 1900s, Watney Market looked very different to how it does now.

The history of Watney Market as we know it dates back to 1881 when John James Sainsbury (yes, that Sainsbury) opened up a new shop at 68 Watney Street. He took the store over from his brother-in-law, who sold cheese and salt bacon to dockers in the area.

However, he wasn’t Watney Street’s only shopkeeper. Mike Drummond, a very popular Irishman, was already operating across the road at number 67. He held a loyal customer base, especially amongst the many Irish immigrants who lived and worked in the area.

Competition between the two was fierce. Sainsbury enacted many clever tricks to attract more business in the area. His first move was to enlist an amusing outdoor salesman to encourage people to try the store’s products.

The venture became more successful, and Sainsbury wanted to conceal the extent of his operation from his competitor. He did so by purchasing a small house on Morris Street, located behind his store, and using it to receive deliveries. This may be the first instance of the now-common practice of backdoor deliveries being used in the UK.

Following years of fierce rivalry, Drummond retired in 1894 and Sainsbury bought 67 Watney Street from him. However, it’s likely that the publicity generated by this feud was what attracted the first market vendors to Watney Street.

By 1902 the market was thriving, with over 100 shops and 100 stalls regularly on the street. This success almost doubled over the next twenty years, through the First World War. Records show that 1927 saw 227 traders applying for pitches in the area – only 200 were available.

Watney Market and The Blitz

This period of prosperity was not to last. At the outbreak of World War Two, the market’s activity came to a sudden halt. Nationwide economic hardship, rationing and conflict overseas saw trading decline rapidly across Britain. Watney Market was no exception.

However, the heaviest damage to the street’s trading community came from the London Blitz. The East End was targeted heavily during the assault, coming to be known as ‘Target Area A’ by German bombers.

This was primarily for the damage that could be caused to the vital dockland areas and its workers. Densely populated neighbourhoods and overcrowded workplaces in the area also meant casualties would be maximised with each attack.

The German bombing campaign began with a 24-hour assault beginning the late afternoon on 7th September 1940, known as Black Saturday. During this time, an incendiary bomb was dropped on central Watney Street – a glimpse of the destruction that was to come over the next eight months.

By the end of the war, Watney Street was flattened and the market was long gone.

The devastated Watney Street sat virtually silent for the next 10 years. In 1955, planning began for a new marketplace and high-rise housing development. This would lead to the creation of Watney Market and Winterton house as we know them today.

The map below was drawn in the 1940s, before the redevelopment.

Rebuilding was no small task. Before development could get started, the entire area had to be flattened. The market relocated in 1965, vendors operating further down the road in the short stretch between the railway bridge and Tarling Street junction. Work commenced two years later and the project was finally completed in 1977, over 20 years after planning began.

This is a map of Watney Market after redevelopment, you may notice a few major differences.

Two roads have completely disappeared: Blakesley Street and Winterton Street, both built over during development. And in the pedestrianised area that we now know as Watney Market there stood several residencies and a large synagogue, all of which were destroyed in the Blitz.

During the two decades it took to rebuild Watney Market, its activity declined substantially. The stalled building work and competition from local supermarkets drove many vendors away. In 1977, graffiti appearing on one of the street’s many derelict shops sums up the local mood at the time. It read: ‘this market has been murdered’. King’s College London published an interesting feature about this stage of the market’s life in February.

By 1979, only 19 stalls still remained. It wouldn’t be until the 1990s that Watney Market started to grow once more.

Getting back on track

Tower Hamlets Council identified Watney Market as a crucial shopping centre in 1991. This marked the beginning of a series of regeneration projects. While they acknowledge there is further work to be done, 30 years later Watney Market is now lively and bustling once again.

In 2018, BBC television drama “The Informer” used Watney Market as a central setting. In an interview, director Jonny Campell remarked:

“We walked through Watney market in Shadwell and it was just so full of life, so colourful, so warm”.

We have to agree. Today, the market can house up to 60 stalls, regularly operating at full capacity. It’s not just a place to shop, but a central part of the Whitechapel community. If you fancy a visit, the market is open every week Monday to Saturday, 8am to 6pm.

If you’ve enjoyed discovering the origins of Watney Market, you may also be interested in learning about the history of Toynbee Hall, another Whitechapel landmark.