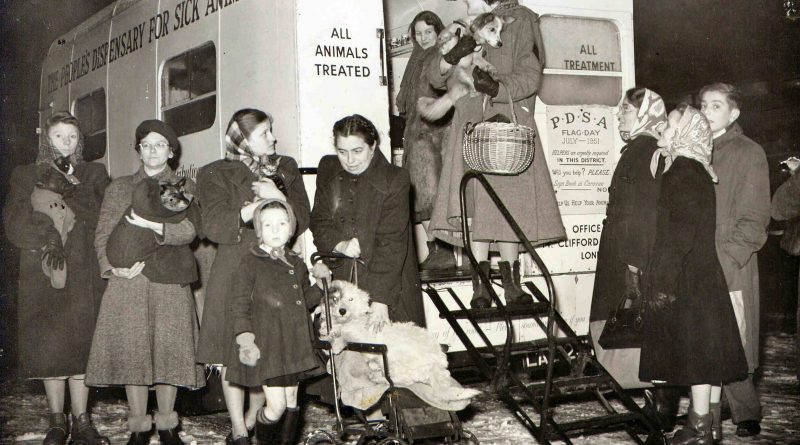 One woman overcame all odds, including a World War, to set up the veterinary charity that has now treated over 20 million pets from poorer families in the UK.

Set up to help animals whose owners can’t afford veterinary fees, the People’s Dispensary for Sick Animals (PDSA) started in 1917 from a clergyman’s small, dingy cellar in Whitechapel.

Now, the charity is one of the UK’s leading veterinary pet services today, with 48 well equipped shiny clinics across the country and helping over 1.7 million families who need financial help to treat their pets.

However, not many people realise that the PDSA was set up by one pioneering woman, Maria Dickin.

Setting up a charity during the First World War posed many challenges. Doing so as a woman with no connections or wealth made it even harder. Undeterred, and powered by an indefatigable belief in animal welfare, Dickin overcame these obstacles to help those in need.

The challenges she faced would go on to shape the very mission the PDSA still adopts today, to work toward raising the status of animals within society and providing their services to those who cannot afford it, for free.

Maria Dickin was a social reformer and animal welfare pioneer, who was equipped with a sense of duty to those who came from underprivileged backgrounds.

In her memoir, The Cry of the Animal, she recalls the excruciating experience of losing her pet that made her want to establish the PDSA.

‘The suffering of my own dog became not only symbolic of all the animal misery I was witnessing in our slums, but also of the vaster world of animal pain whose cry nobody seemed to hear.’

A local of the East End, Dickin was born in 1870 in Hackney. She was the eldest of eight children and the daughter of a Wesleyan minister. Raised on her family’s modest living, this gave her the sense of duty to support her family.

Defying social conventions of 1890s Britain, Dickin was not afraid to be a working woman. Before setting up the PDSA, she opened a successful voice production studio in Wimpole Street, Marylebone, but had to give it up after she got married in 1899.

With her knowledge and passion for the social problems of the period, she became a volunteer in the slums of London, helping women and children who were suffering horrific poverty during World War I. When visiting their homes and streets, she witnessed the neglect the animals of the slums were enduring. This would lead her to gain the insight she needed to create her animal charity.

‘I was amazed and horrified to see the sufferings of these animals. In the streets were many dogs and cats walking on three legs, dragging along a broken or injured limb; others nearly blind with mange or covered with sores; nearly all looking dejected and miserable and searching for food in the gutter,’ Dickin recalls in her memoir.

Her life’s accomplishments for services to animals would take her on to being awarded an OBE in 1929, and raised to a CBE in 1948. The English Heritage charity honoured Dickin’s memory with a blue plaque on the Hackney House in which she was born.

The history of PDSA

Dickin’s relentless passion for her cause led her to overcome the obstacles that were set in her way. In her memoir, she reflects on how the struggle of the war had impacted every man, woman and child. For her, it seemed as though no one had the time or inclination to think of the animals.

The war effort required all services and funding for the nation, and people had criticised her for wanting to spend the help needed for humans, on animals.

‘I fully recognise that from what might be called a commonsense point of view, no worse time could have been selected to begin any fresh work than the year 1917.’

But the way Dickin saw it, keeping animals was essential for humans, and especially for poor people. Those who were working jobs such as greengrocers, fishmongers, hawkers of wood, depended on a donkey or a pony in order to make a living. As poor people were the most in need of animals, they were also the ones who could not afford to pay for a vet.

Despite the discouragements from those around her, and equipped with her compassion to help the less fortunate, day after day she tramped many miles of the East End to find a suitable location for her dispensary.

She came under criticism and faced rejections by those in the medical field, whose services were overwhelmed with the support needed to treat men, women and children impacted by the war.

Finally, having come upon the kindness of a clergyman, his nature as a fellow animal-lover gave Dickin the opportunity she sought after.

She hung a notice outside her thirteen feet square, dark and run-down cellar, which read:

‘Bring your sick animals.
Do not let them suffer.
All animals treated.
All treatment free.’

Not having any medical experience herself, she was fortunate to secure the services of a well-known animal practitioner with plenty of experience to help her.

On its first day of opening, the dispensary only attracted four patients. However, among these patients, it was the owner of a limping donkey whose astonishment at the PDSA’s genuine free services led to the avalanche of cases that followed. Along the miles of trekking for his work, he served as a publicity agent who told everyone what the PDSA had done for him, emphasising its free services.

The PDSA turned out to be overwhelmingly in need, with people bringing in their pets even during air raids. This demand led Dickin to upgrade from the cellar into a shop and four rooms in Whitechapel, opposite the People’s Palace. As she witnessed the growth of animals in need, she envisioned setting up more dispensaries across and beyond London.

With the goal to travel outside of the capital, the iconic PDSA horse-drawn caravan was transformed into a travelling dispensary, designed to make a tour around Britain and collect animals who needed help.

Further success allowed the PDSA to open their first clinic outside London in Salford in 1923. Following this, the PDSA Sanatorium was established in Ilford in 1928, with Dickin’s passion to train more PDSA practitioners.

Born out of the struggles of World War I, when World War II broke out, the PDSA was in a position to help the animals who would suffer in the second war. By this period, they had five fully-functioning hospitals, 71 dispensaries and 11 mobile caravans.

During the Blitz, PDSA Animal Rescue squads helped over a quarter of a million pets injured or buried in the rubble.

On her mission to raise the status of animals in society, Dickin established the PDSA Dickin Medal in 1943, which acknowledges outstanding acts of bravery displayed by animals serving with the Armed Forces or Civil Defence units in any theatre of war, worldwide. It is recognised worldwide as the animals’ Victoria Cross.

The most recent recipient of the PDSA Dickin Medal was posthumously awarded to a French Navy Commando dog, Leuk, a Belgian Malinois, for his life-saving actions while on duty.

Dickin’s passion for animals led her charity to climb to great heights of success and still continues to grow today.

Alongside treating pets, they are also a leading authority on pet health and wellbeing. Their work ranges from raising awareness of pet obesity, surveying the state of Britain’s pet nation, raising the status of animals, and celebrating their contribution to our lives.

As their services continue to evolve and extend today, they are still infused with its core principle from a century ago. Its story is one that defied all odds to accomplish a heartfelt mission, to save pets from neglect and to provide their services for free for those that could not afford it.

If you enjoyed this article you may also like to read The resilient history of The George Tavern and its battle to stay.