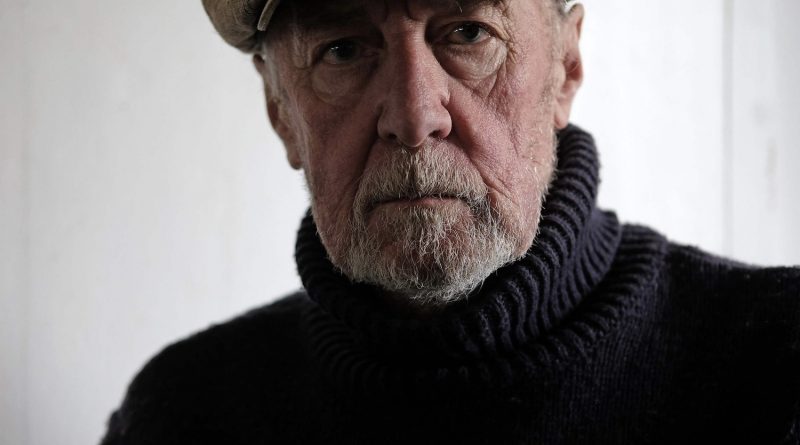 The streets of Whitechapel play a crucial role in the East End’s historical struggle against racism, and to preserve such history calls for the bravery of a photographer, ready to capture its tumultuous times through the click of a shutter frame.

Syd Shelton, 74, has dedicated almost 50 years to the profession, and considering retirement does not cross his mind. ‘I can’t retire because I’ve never really had a job’ he chuckles, clutching at his flat cap that is reminiscent of the old East End. He is referring to his freelance photography career spanning commissions for titles such as Nation Review, Tribune, and Digger.

Having studied fine art as a young man at Wakefield College of Art, he tells me painting never gave him the form of expression he was yearning for. ‘I realised that I was a very political person and an activist, and yet my art didn’t reflect that at all.’

Photography, for him, gave him an ‘activist’s eye,’ allowing him to express his passion for politics as well as capture historical events for generations to view.

This brings into question ‘why photography, specifically?’ drawing upon the mystery behind the magnetic pull a specific creative form has on an individual who has something to say.

His answer touches upon a very important feature of photography that sets it apart from the rest of the creative methods. ‘Photography is accessible,’ he explains, emphasising the need only for a set of eyes and a willingness to observe.

Shelton’s photographs allow us access to a time we may not have had the chance to experience. As one of the key activists of the Rock Against Racism (RAR) movement between 1976 and 1981, his photographs capture many demonstrations that took place across the country between the National Front and the anti-racism protestors.

Formed by a collective of musicians and political activists, RAR was created to resist the racist ideology in the streets, parks and towns halls of Britain through music. Under the slogan ‘Love Music, Hate Racism’, it showcased reggae and punk bands on the same stage, attracting large multicultural audiences.

His photographic endeavours took him all around the globe, but the most significant of them all is his passion and dedication to reinventing the stereotype of the typical East Ender.

Although being one of the prolific names that is associated with photographing the East End, Shelton’s revelation that he is originally from Yorkshire might catch some people by surprise.

He went to work in Sydney, Australia, in 1973 where he began his photography practice. Upon his return to England in 1976, he started working as a photographer in London as part of the RAR movement. His work with RAR is what guided him to the East End, and where he found himself capturing the anti-National Front demonstrations in the Whitechapel area.

‘Whitechapel was one of the areas which was very much at the sharp end of that fight against racism. Particularly areas like Brick Lane, where the National Front put paper sellers down there every Sunday in the most intimidatory fashion because at that time Brick Lane was a largely Jewish and Bangladeshi community. It was fantastically intimidatory.’

One of the key events in Whitechapel that Shelton documented was the demonstrations that sparked following the racially motivated murder of Altab Ali, a young Bangladeshi textile worker who was attacked in 1978.

His photos from the protest depict the passion of the demonstrators, as the black and white effect of the photos add emphasis to the emotions felt within the photo, making it seem almost as if you can hear their chants through the image.

Having lived on Queensbridge Road, Hackney, for approximately 35 years, Shelton tells me he refers to the vast land of the East End as his portrait studio.

The particular spot that was a favourite of his was Grove Passage, near Cambridge Heath Station in Bethnal Green, where two railway bridges intersect by the Regents Canal, giving the location a desired form of lighting for a photographer.

He is excited to reveal a picture he took under the railway bridge of the lead singer of Matumbi, Bagga, who performed in one of the first RAR gigs.

Beyond his work as a documentary photographer, Shelton explains that he sees himself as more of a portraitist, whose photos immortalise a conversation between a photographer and the subject.

‘I like to work with people in trying to set up a conversation between the camera, myself, and the person I’m photographing. And I really want to try and get the camera to disappear. It’s very much like a conversation.’

Such a story that he’s captured to last for years and years is his photo of two skinheads posing in Petticoat Lane in 1979.

Back then, skinheads used to hang out by a shop called ‘The Last Resort’, which was referred to as the ‘skinhead centre,’ he tells me. The two men had agreed to be photographed by Shelton, but their inauthentic poses ruined the realism he sought to capture.

‘I started arguing with them about racism because they both were a pair of quite heavy racist characters and I could see that they were starting to change, and they started to give me something of themselves. They stopped being the posers, doing skinhead pictures for the tourists, and they became themselves. And I could see the guy on the left, his fists were starting to clench up, and I knew he was going to hit me if I kept pushing him, but I did keep pushing him anyway, and eventually, we got the photograph.’

Over a year ago, one of the men from the photograph (Lee Daley, right), got in touch with Shelton after seeing that very picture of himself many years later on the internet, horrified to find it captioned as ‘Nazi skinheads.’

During their correspondence, Daley reflected back on who he was at the time, describing himself as a ‘rebel without a clue,’ and ‘being a victim of the insidious extreme right-wing propaganda of the times that had taken root among the disenfranchised, white working-class.’

As it turns out, Daley came from a familial background of trade union activism and found out that his great, great grandfather was from Jamaica, making his maternal grandmother mixed race.

‘Within 2 years of this photo being taken, I’d become a highly politicised Socialist, ANL, anti-Apartheid activist, who looked back embarrassedly on a couple of misspent years.’

‘I love the kid in that photo now. I remember how he felt like an imposter at times, and that he’d often parrot the words of others as his own. I remember him thinking to himself when alone sometimes, ‘do I hate black people? Do I really hate Bengalis?’, and him feeling lacking somehow because – at heart – he knew he didn’t.’

This story is an all too clear reminder of the transformative shift of the East End.

The latest display featuring Shelton’s photos is the Vanishing East End exhibition at the Tower Hamlets Local History Library and Archives. The event, running from 1 October 2021 to 4 February 2022, ​​highlights the huge social and economic changes in the area, including the now-vanished industrial landscape and the deregulation of the financial markets.

As the exhibition depicts, the East End has witnessed a visible transformation of its landscape.  One of the most notable changes can be seen through the regeneration of the Docklands, which used to be home to the world’s largest port and is now home to new creative professionals working in Canary Wharf.

In many ways, the East End has transformed as the passing of time commands everything to, but is this also the observation of one of its keen observers?

‘Things have changed less than what people think, in many ways. Somewhere like Brick Lane has become gentrified and a lot of money has been put into it, and it’s become very trendy. That’s changed a lot, but generally speaking, things haven’t changed as much as people would like to pretend.’

As we are likely to enjoy the positive changes to an area like Whitechapel, Shelton’s perspective reminds us that this is also inevitably met with some negatives.

‘But somethings are disappointing when you see them, like the Whitechapel Bell Foundry. It’s tragic to see those sort of traditional pieces of our history been squeezed out through economic necessity and hopefully it will get reprieved because they haven’t turned it into luxury flats yet, but I’m sure it will be, it if doesn’t get reprieved.’

My time speaking to Shelton reminds me of the importance of creating pathways to access history and document the world that is constantly evolving around us. Although our surroundings may be changing, we must have ways to preserve them and remember them.

For Shelton, as if his photos are not a clear indicator enough, I asked him how he would like for the East End to be remembered.

‘I’d like it to be remembered as a place of struggle and great movements by people, and really one of the most creative and vibrant parts of any city anywhere in the world. And I think it is, and it constantly throws up more and more sportspeople, artists, photographers, musicians, the list of people who come through the East End is just unbelievable. It’s a melting pot of ideas and cultures which we all love.’

The Vanished East End: Documentary Photography from the 70s and 80s continues to run until 4th February 2022, Monday to Friday from 10am-5pm, at the Tower Hamlets Local History Library, 277 Bancroft Road E1 4DQ.

There will also be a guided tour at 2pm in the exhibition space on Saturday 6th November with curator Susan Andrews and participating photographers Mike Seaborne, Tom Hunter, and Syd Shelton.

If you enjoyed this article you may also like to read an interview with East End historian David Rosenberg.