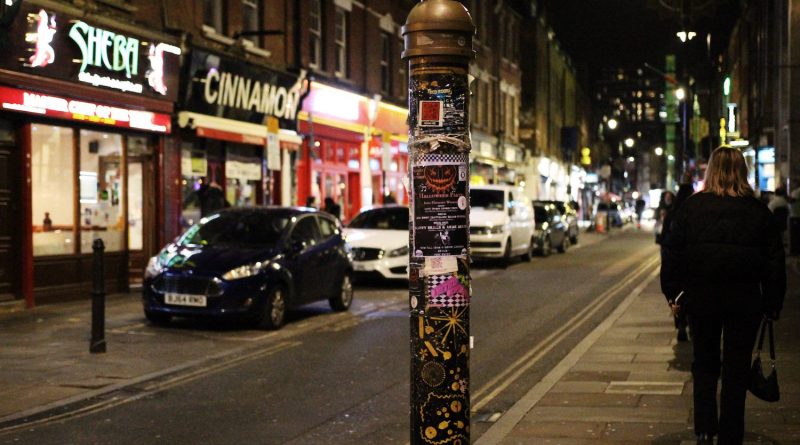 Exploring what has become of Brick Lane’s Banglatown by taking a trip through its famed curry houses, the Brick Lane Jamme Masjid, and Taj Stores.

Brick Lane’s Banglatown is a visible reminder of a road of two identities. With Whitechapel’s historical role in providing a home for the influx of Jewish refugees in the late 1800s and then Bangladeshis from the 1950s onwards, these communities played a big role in creating the charm of what Brick Lane is today.

Famous for its curry houses and vintage Jewish leather shops, the clothes district now attracts a young and fashion-conscious demographic, along with the increase in pubs and restaurants that keeps the nightlife of the area vibrant.

Making up the largest community of British Bengalis in the country, Whitechapel’s Bengali presence created a cultural hub along the Brick Lane area. As their community grew, this brought business and venture to Brick Lane’s enterprise.

Banglatown received its name officially in 1997 by the London Borough of Tower Hamlets, and with it came the decorated gateways into the street, the traditionally decorated street-lamps along the road, and also received grants to upgrade the existing shops and restaurants in the area.

Although the street lamps begin upon your turn into Brick Lane from Bethnal Green Road, Banglatown does not begin until the southern part of Brick Lane. What you will find at the top of the road is its hip stores like Crave Joint, Made of Dough Pizza, Hunky Dory Vintage, mostly appealing to the new wave of the people that frequent the area.

As a stark reminder of this, along my walk my eye caught a couple of friends walking out of one of the vintage shops, who were both dressed in an elaborate and unique fashion. One of the men had his hair dyed in a bright red colour with a bun styled atop his head, and his friend was clothed in a hefty winter coat with a Dalmatian print.

Along with the edgy fashion stores, Brick Lane’s many side streets are also plastered with colourful graffiti and street art, featuring such artists as Banksy and Stik, who have attracted many art lovers to Brick Lane.

Upon passing the Old Truman Brewery, you will find the famed curry houses, the Brick Lane Jamme Masjid (mosque) and the traditional Bengali supermarkets.

Arriving on Woodseer Street, there are multiple curry houses to choose from, ranging from City Spice, Sheba, Cinnamon, Aladin, Jasmine, all exteriors decorated in a red, black and brown fashion.

The curry house that seemed like an outlier to me was Preem Indian Restaurant, as its sign declaring it also as a ‘cocktail bar’ surprised me. It appears to be accommodating to newcomers of Brick Lane, ready to enjoy their favourite choice of daal with a Cosmopolitan drink sitting right beside it.

A glaring memory that you will have of Banglatown is of being approached by the restaurant workers in an effort to invite you into their premises. The competition that understandably exists between the curry houses is unmissable, as the boom in Bengali restaurant owners contributed to the recovering economy of the area that was once known to be impoverished.

How can one choose which curry house to dine in?

I found myself opening the door into The Famous Curry Bazaar, its name sounding somewhat familiar. I had arrived just before the evening rush hour so the atmosphere of the restaurant was soothing with just a couple chatting away in the corner.

I asked the waiter if they do takeaway, wanting to savour my food as I continue to explore all that Banglatown has to offer. Even though I already knew what I was going to order (vegetarian samosas – always and forever, the vegetarian samosas), I accepted the waiter’s offer of a menu.

As I sat back and waited for my order, I loosened up to take in the rest of what the mise-en-scene had to offer. It almost feels like I’ve arrived in Bangladesh, as I eavesdrop on the native workers speaking in their language with the serene Desi music playing in the background.

The waiter returned to my table and placed a sweet in front of me. “Have a chocolate” he insisted, reminding me of the warm hospitality that is common in Asian cultures.

When my samosas were ready my waiter had generously brought an extra pot of mango chutney free of charge – possibly the best combo to enjoy with samosas. I returned to the street to enjoy my food as I took on the scenery of the Brick Lane Jamme Masjid’s minaret changing colours in the short distance before me.

The sweetness of the chutney with the spicy potato and vegetable filling inside the samosa delights my tastebuds as I continued to walk ahead.

Taj Stores was just a few steps away from me and the smell of the burning incense drew me in. With the excitement to browse the different products you won’t otherwise find in your local Tesco, I took my time between the aisles.

As I expected, I found something I’ve never seen before: a corner of the store was stacked with Bamboo Stools on top of one another. According to the sign beside it, Bamboo Stools, also referred to as ‘Moora’ by its local name, is known to be made by prisoners in Bangladesh. As the sign details, it gives them something productive to do as well as earn them a little donation, while also keeping them occupied by staying away from unwanted troubles they may find themselves in prison conditions.

I headed further into the store and was drawn to the display of Indian and Bengali snack food, the branding of the packets splashed in different colours and aesthetics in comparison to your usual Walkers crisps. I continued in my journey and browsed through the rows packed with vegetables, rice packets, legumes, kitchen products and the butchers. Satisfied that I’d looked into all the aisles, I returned to the street to continue on my voyage.

The spectacularly tall Brick Lane Jammed Masjid stands before me, its minaret continuing to change its colours by lighting up the night sky. What was once previously home to a Church for the French Protestants and a Synagogue for its Jewish Huguenots, the grand Georgian architecture continues to add a defining characteristic to the landscape of Banglatown.

By Fashion Street, I notice that Banglatown begins to end because of the return of burger joints and chic cafes.

My time in Banglatown begins to come to a sweet end – quite literally and figuratively. As the curry houses become far and fewer after the masjid, I made my last stop in Banglatown by visiting Rajmahal Sweets. Having never had the opportunity to taste authentic Bengali sweets, I asked the helpful worker to surprise me. I waited for my order as I took in the scent of the sweet sugar in the air, and felt the buzzing of the display fridge before me through the ground.

Opening my box of sweets was like opening a mystery box, with treats coming in the shapes of squares and circles and the colours of oranges, whites and browns. Nervous for a change, I went for what looks like a slab of cheesecake, and it tastes somewhat like it too, but the flavour of cream overpowers the taste of the cheese. I tried another familiar-looking sweet that reminds me of a churro and turns out, it does taste very similar to it, but with the addition of a cream filling.

I mustered up the courage to try something different and went for what looked like a ball of bulgur rice soaked in icing. As I bit into it I am amazed at the combination of sweet and savoury, of what has probably become my favourite of the three.

The end of the road has led me to The Buxton pub, a restaurant and hotel that recently opened whose appeal attracts city dwellers working in the area.

As I took a seat by the bar to reflect back on my journey through Banglatown, it feels as though I had been caught in a feeling similar to whiplash – my current location felt starkly different from where I had been.

The Buxton is a reminder of the city creeping into the Aldgate area, designed for city workers drawing their clientele in for meetings and social interactions while enjoying an Aperol Spritz. Loud waves of laughter erupt in the room while the stereo pumps out contemporary jazz songs, echoing the arrival of the metropolis into the cultural hub.

Banglatown, on the other hand, has a historical and cultural significance that built the foundation of Brick Lane. Walking through its streets will have you feeling like you are reliving its history, which seems to be slipping further and further away.

Its most popular attribute, for instance, of the curry houses, that have been experiencing a decline from 60 in the mid-2000s to 23 in 2018. Particularly of the recent approval of the plans to develop the Old Truman Brewery, it is feared that the Bengali community is going to continue to be rooted out. Even so, community groups in the area continue to work toward preserving the legacy of Banglatown.

Banglatown continues to be a defining characteristic of Brick Lane, giving it an authentically built community and cultural relevance to the area, and reflecting London’s diverse appeal. Its beautifully decorated stores, markets, and people all add character to Brick Lane that cannot be recreated anywhere else.

If you enjoyed this article you may also like to read In search of Whitechapel’s best pub gardens after lockdown.