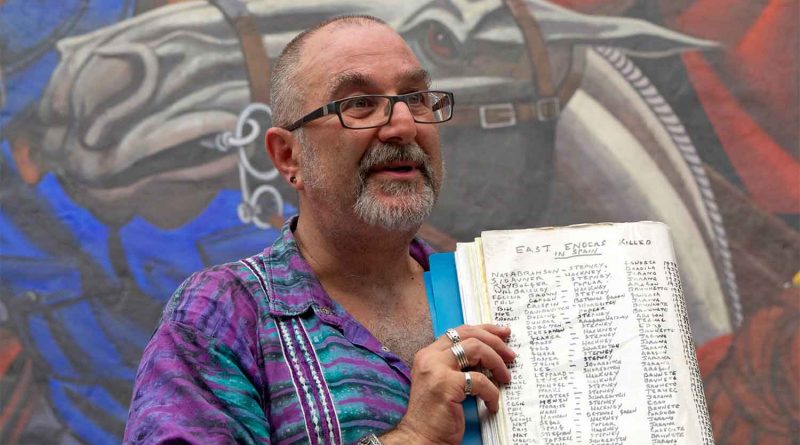 David Rosenberg is a radical historian whose work focuses on London and the East End. He has a long personal and professional history with the area, which informs his work as a writer and walking tour guide.

I sit down at my dining room table to meet David Rosenberg virtually; he is still isolating due to Covid. Unsure of what to expect of my meeting with a historian – I’ll admit images of some tweed-clad bore did come to mind – I waited in anticipation.

When you first meet the energetic historian, it’s hard not to be taken aback by his kind and constant smile, eclectic silver jewellery and grey goatee. He’s altogether more Dave Myers than Dave Starkey.

I only had a few questions for him, but there are no short answers with David Rosenberg. His passion for sharing knowledge shines through in his every sentence. It seems that he considers himself a teacher first and foremost, rather than an academic. And like any good teacher, he makes you feel excited to learn.

Growing up in the East End

Rosenberg was born in Hackney, spending most of his childhood there before moving to Ilford as a teen. An interest in his family’s background imbued him with a love of history even from a young age.

“I had a few friends from school, who were also Jewish people whose grandparents grew up in the East End like mine, and we used to meet up after work on Sunday morning jobs around Petticoat Lane”, he tells me. “We were wandering around the streets where our families spent a considerable amount of their lives”.

He explains that his grandparents were Jews from Eastern Europe, who migrated to London in the early 1900s. This was a common move for Jewish people from that region at the time. It was this movement of people that led to the formation of Whitechapel’s Jewish community, which was the area’s predominant ethnic community for much of the 20th century.

“They were very poor their whole lives, but they had meaningful lives. I was always curious to know quite a lot about that” he says. “My grandad was a boxer in the East End trying to earn a few quid. He told me about his individual punch ups with various Black-shirts and fascists.”

Rosenberg later returned to the East End, working for the Runnymede Trust in the 1980s. As he continues to talk about his life, it becomes apparent that he has always been drawn to the area.

“We were based on Princelet Street, off Brick Lane, just five doors down from where my grandmother had lived in the 1910s and 20s.”

Since 2007, Rosenberg has been doing walking tours of London’s radical history. Most of these walks are in the East End, which he says he finds “the most fascinating part of London.”

Starting with just a couple of walking tours, Rosenberg now hosts 15 separate walks around London. These cover the radical political history of several areas, specific events and people such as the Jewish or Bangladeshi community.

Rosenberg tells me that his interest in radical history was sparked in the early 1980s by fellow historian Bill Fishman. They later became good friends and, when Bill died a few years ago, he wrote his obituary in the Guardian. Rosenberg remembers that first walk of Bill’s he attended in vivid detail:

“Two hours with him, it was like ghosts coming back to life. He could describe people in such a graphic way, you know, what they did, and where this happened. It was spellbinding.”

This began Rosenberg’s embarkment on his continuing journey of learning about London’s radical history. Over 20 years later, he was presented with the opportunity to do a walk of his own. A group of campaigners – although he admits he can’t recall what they were campaigning for – were looking for a way to raise funds.

“They wanted it to be something different to like a pub quiz. I said: how about if I do a radical East End walk?”

Finding an immediate passion in teaching people about London’s radical history, Rosenberg’s walking tours proliferated. He found himself taking several opportunities to host fundraising tours for causes and campaigns. At the time, he was working as a primary school teacher in Islington.

“And so I was doing this in evenings but I was realising that I was actually, in some ways, getting more out of this than my day job” he says.

Following his newfound passion, Rosenberg chose to pursue a living from his walking tours. He’s now been guiding people through London’s history for over 14 years.

The battle for the East End

In 2011, Rosenberg published his first book entitled “Battle for the East End”. Here, he chronicles the rise of fascism in 1930s Britain led my Oswald Mosley’s Blackshirts, focusing in particular on the response by the East End’s Jewish community. In the book he provides a nuanced view of the situations and tensions which culminated in the Battle of Cable Street.

The Battle is one of Whitechapel’s most significant historical events. On Sunday 4 October 1936, a clash broke out on Cable Street between anti-facist demonstrators and the Metropolitan Police, who were sent to protect a fascist demonstration. Eventually, the battered protestors pushed the police and the fascists back, in a decisive defeat which many consider to have heralded the end of Britain’s growing fascist movement in that decade.

Aside from its historical significance, there is sentimental value to Rosenberg in knowing the Battle is integral to his own family history. The event formed the backdrop for the community he grew up in.

“I knew about the Battle of Cable Street from when I was really young” he tells me, “I think, probably before I learned to ride a bike I knew about it from my grandad”

“I’ve been involved with the commemorations that have happened, every five or 10 years, which have been going on since probably around 1986, the 50th anniversary.”

“I was the overall convener of the 80th anniversary, which was in 2016, where we had a march that started near Aldgate East station in what is now called out of Altab Ali Park” he tells me, “so we marched from there to mark the connection between what was happening to the Jews in the 30s and to the Bengalis in the 70s.”

The Battle of Cable Street is central to his work. It represents effective unity and resistance by ordinary people, which is what his field of ‘radical history’ is all about. He tells me why the East End is such a fascinating place to him in this regard:

“The East End has just been so rich in terms of those radical movements for change. And these have been collective struggles. These are not just one or two people standing up and making a great speech. It’s community struggles, really.“

Looking to the future, Rosenberg explains what he thinks is the best way for someone interested in the history of Whitechapel and the East End to find out more:

“Well, if they’re fit and mobile they can come on one of my walks! Although during lockdown I’ve moved to virtual walks. But I’m hoping in the next few weeks that it might be possible to start again with physical walks.”

We conclude the call on this hopeful note and I close my laptop feeling much wiser than I did 50 minutes ago.

Rosenburg’s work causes you to reflect on how every place you see – from the route you take to work, to the park you sit to have a coffee in, to even the very place you live in – has been shaped by history. I’ll admit my own perceptions of learning about the past, largely shaped by dull youthful hours in the classroom, have been thoroughly changed.

If you’re interested in attending one of David Rosenberg’s walks, keep an eye on his website for updates at eastendwalks.com. You can also purchase his second book, “Rebel Footprints” (Pluto Press 2019, 2nd ed.) online.

For more on the history of Whitechapel, you might like to read our guide to the area’s 50th anniversary celebrations of Bangladesh’s independence.

My Home, My Bari: Rebuilding the loss of home through community

My Home, My Bari exhibition: Celebrating the British Bangladeshi experience in London