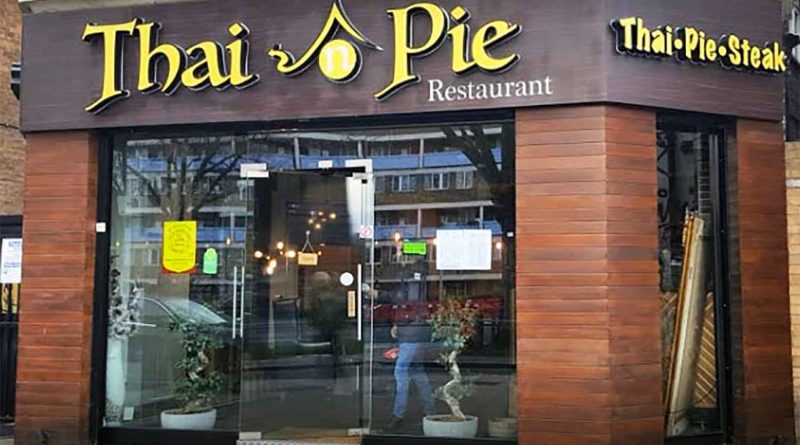 It’s one of life’s most difficult situations: a group of people are deciding where to eat, but they all want different food. We’ve all been there, and each seen many friendships broken over debates which weigh the virtues of the chow mein versus the korma.

Whitechapel’s “Thai N Pie” offers a remedy to this conundrum, of sorts. Here you can order both authentic Thai food, or classic British cuisine, from the very same menu. This is what first attracts many customers to the unique eatery, as well as its bright yellow sign which stands out on Mile End Road.

The restaurant first opened in 2016, and met enough success to later open a branch in Stratford. The manager says a lot of customers initially respond to the establishment with confusion, unsure of what their “primary” cuisine is. He firmly believes, however, that they offer fantastic food from both.

Behind the operation are two lead chefs – one who specialises in Thai cuisine, and the other in British. When they found themselves both interested in opening a restaurant, it suddenly occurred to them to combine their skills.

“A lot of people think restaurants that serve different foods are no good” the manager tells says. “But here, both are excellent”.

When you first enter Thai N Pie, you are immediately struck by the serenity of the venue. We all know how loud and abrasive the traffic on Mile End Road can become. Despite facing immediately onto the street, the restaurant’s warm, calm atmosphere provides welcome insulation from the noise.

The interior is fairly low-lit, with trendy, industrial-inspired exposed light bulbs illuminating each table. Combined with the many wooden-panelled surfaces and subtle Thai-themed decor, a comfortable, cosy dining space is created.

The part-exposed kitchen area does create an exception to this, however, emitting a colder light through its glass panel. Although rather than being unwelcome or abrasive, it is something of a feature – likely unknowingly to the proprietors. Between courses, I found myself quite entertained by the busy chefs and waiters, all jostling around each other whilst preparing my food.

Looking at the menu, it is separated into two halves. The first portion offers Thai food encompassing noodle, rice, curry dishes and the like. The latter half brings the shock of pies, burgers, and steak. Far from being weighted too much towards one cuisine, the manager says the most popular dish is the Thai green curry, followed by the British lamb chops.

Firstly, the portions are sizable, with both my curry and rice coming on plates that likely would have served two each. To some this may seem excessive; I was very happy. Although generally, my advice would be to perhaps order one rice between two people. I ate about two-thirds of all my food and took the rest home.

The sauce of the main dish was an example of classic Thai food done right: pungent, funky and fishy. It was filled with vegetables, quite loose and medium-spicy, with several red chillies which it can be cooked without on request.

The Black Tiger prawns complement the sauce perfectly, being meaty, mild and subtly briny. As a bonus, they are also served in the shell to preserve their flavour, but it has been split so they’re not too difficult to access (no fingers required!)

Adding another element to this was the fried rice, packed with fragrant, almost floral vegetables. Combining this with the sauce created a wonderful texture and worked to subdue some of the heat, varying the dish with each mouthful.

I’ll admit, I was somewhat biased going into this review: I am very partial to Thai food. I have eaten a lot of it, and this dish is up there with the best. This dish left me very satisfied and I was very happy to be able to finish it for lunch the next day.

At the table next to me were two young friends. One ordered a green Thai curry, the other lamb chops. I found the contrast quite amusing, but it spoke to how well Thai N Pie’s formula has worked over the past five years.

Whitechapel is one of the most multicultural places in the UK, it only makes sense that its restaurants are following suit.

From 1978 to Today: Whitechapel’s Fight Against Racism