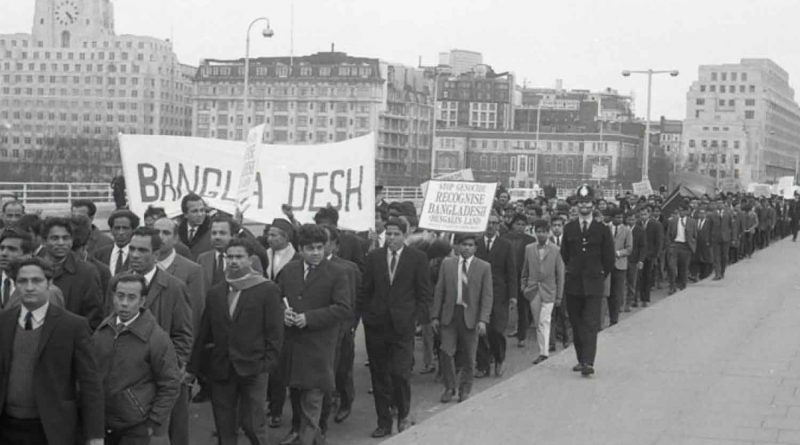 Despite being won half a century ago and over 4,000 miles away, Bangladesh Independence is a cause for celebration every year in the Whitechapel community.

Friday 26 March marked 50 years since Bangladesh declared its independence from West Pakistan. In celebration of the milestone, local groups in Whitechapel are coming together to present the Bangladesh 50 Years project.

The project will explore the interlinked past and present of Bangladesh and East London through a series of art projects, educational talks and historical exhibitions scheduled to last for over a year. The project is being led by the Tower Hamlets Local History Library & Archives and the National Portrait Gallery.

Steering the programme are several groups of local academics, historians, activists and artists. This includes the Swadhinata Trust, a community group based in Tower Hamlets that works to promote Bengali history and heritage. They are also working with Toynbee Hall on their ‘Stories of 71’ project.

“Many Bengalis who were here in 1971 supported the independence movement from the UK while the struggle was going on back in Bangladesh. Even today, the Bengali community has a very strong connection with Bangladesh in terms of family, social, political, cultural and, of course, business.”

The Council has also planned to install a new public artwork at the Idea Store in Whitechapel, a large sculpture which will spell out ‘BANGLA’ in Bengali.

The milestone is significant for many Whitechapel residents as the area is home to one of the largest British Bangladeshi communities in the UK. Despite taking place over 4,000 miles away, Bangladesh Independence Day plays a major part in the history of the area.

The declaration of Independence in 1971 prompted the beginning of a casualty-heavy nine-month conflict. This eventually resulted in mass migration to the East End and intertwined the history of the two areas.

However, their fight for freedom came at great cost. Bangladesh suffered mass civilian deaths, with some estimates being as high as three million. Their economy and infrastructure was also ravaged by the conflict. These factors prompted mass migration from the country, especially to Britain.

In response, the British government enacted an immigration policy that only allowed adults to migrate if they had a job secured in the country. As a result those who had already migrated would secure work for their relations in Bangladesh, meaning the community became densely concentrated in only a few places.

Tower Hamlets was the most prevalent of these places. Now, fifty years on, approximately 25 percent of the entire British-Bangladeshi diaspora live here. Although the origins of the East End’s Bangladeshi community can be traced much further back, the war was a major catalyst in forming the community as we know it today.

“Tower Hamlets is the spiritual home for many British-Bangladeshis. I’m humbled to be marking the occasion of my country’s birth from the perspective of my other home. I look forward to celebrating the best of Bengali culture and exploring what it means to be British and Bangladeshi in 2021.”

For more information about the project, and all upcoming events in Tower Hamlets, see the Council’s guide.