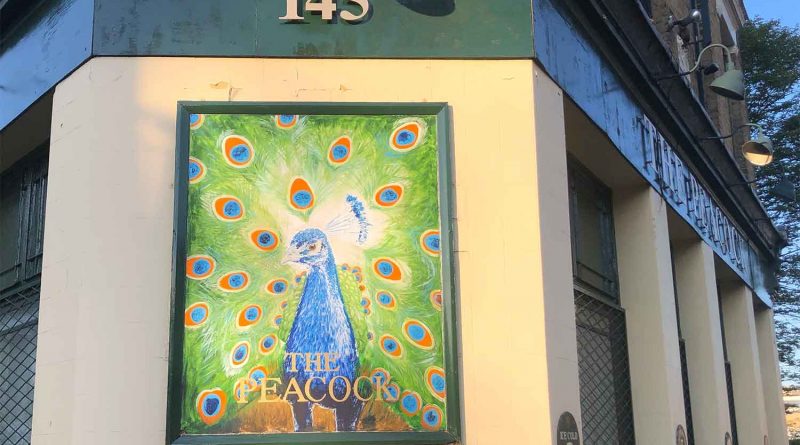 We take you through some of Whitechapel’s most intriguing, historical and unusual pub signs.

Walking through Whitechapel, you’ll find every pub has a story to tell. We’ve picked out some of the area’s most interesting pub signs, from the visually intriguing to the historically significant. How many have you spotted on your Whitechapel travels?

This colourful bird can be found on the corner wall of The Peacock, a family-owned pub in Stepney Green. Local landlady Patricia Pyne says she inherited the pub from her parents, and it has been owned by her family for 45 years.

The colourful peacock was hand painted ten years ago to replace the former sign which had rotted away. The pub – and it’s colourful mascot – is located at 145 Dunelm Street, just around the corner from Stepney Green park.

One of Whitechapel’s most famous pubs, The Blind Beggar has deep roots in the area. It’s intriguing sign is no exception. The painting depicts the local legend of ‘The Blind Beggar of Bednal Green’, Henry de Montfort.

The story goes that, after being wounded and losing his sight in the Battle of Evesham in 1265, Monfort was nursed to health by a baroness. They then had a beautiful daughter named Besse so he decided to pose as a beggar on the streets of Whitechapel to conceal his wealth from would-be suitors.

This rustic pub is often referred to as London’s oldest gay pub. Its sign reads ‘always a warm welcome’, referring to its longstanding reputation for accepting patrons which others may have turned away in the past. The name signifies the pub’s maritime roots, serving many of Limehouse’s weary sailors in the past.

The Princess of Prussia

This cozy pub tucked away in the centre of Prescot Street, is named after Victoria, Princess Royal – the eldest of Queen Victoria’s five daughters. This royal wasn’t actually the princess, but rather the Queen of Prussia, as the wife of German Emperor Frederick III. Someone must have decided “Princess of Prussia” just had more of a ring to it.

The pub, owned by Shepherd Neame Brewers, has been run by local Janet Wellman for nearly 10 years. She tells me it has stood in its current location since at least the 1800s.

According to the owners, The Brown Bear dates back as far as 1793, and was rebuilt in its original location in 1830. Their pub sign is unique: instead of the usual image or painting, there stands a three-dimensional, iron grizzly bear with outstretched arms.

It’s a good job the fuzzy mascot is standing so high up as patrons might be tempted to give him a hug after a few drinks at the bar below.

This homely pub is nestled right next to the London Royal Hospital, hence the medical theme. The pub is named after a legendary doctor – pictured in the sign – who regularly went out of his way to help those in need. This is a tribute to all the hard-working medical staff who are busy at all hours, just yards away.

This grade II listed building is one of Whitechapel’s most cherished landmarks. It’s signage is all original, but when owner Pauline Forster first bought the building, the exterior was completely covered in concrete due to a previous dodgy restoration effort. She decided to chip it all away, revealing the original brickwork and ‘half way house’ lettering underneath, which can be traced back to the 1600s.

Pauline tells me there is a tunnel that runs underneath the land and that the space behind the pub – formerly Stepney’s nightclub – was once a coach house. She believes the original use of the building was a short-stay location where travellers could rest and eat.

Ok, so we’re cheating a bit with this one. While the Hoop & Grapes might not have the most exciting signage, it’s slanted exterior makes it one of Whitechapel’s most unique-looking pubs.

The small pub is one of the few timber-framed buildings to predate the Great Fire of London in 1666. It actually only escaped the flames by 50 yards. The wood has clearly warped a little over the years but after extensive restoration, the venue still stands strong – just mind your head when you walk in.

Petticoat Lane Market – one of the oldest markets in London

A tour of the most notable mosques that adorn Whitechapel