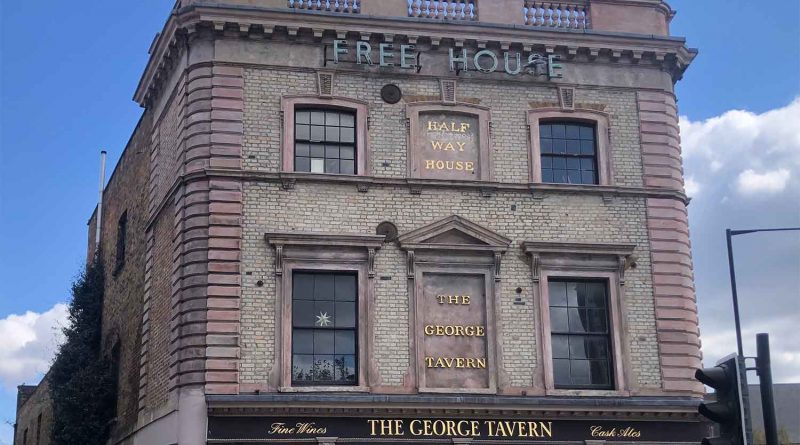 With local pubs able to reopen their doors in a few weeks, we spoke to Pauline and Francis of The George Tavern in Whitechapel about recovering from Covid, the importance of small music venues and how one anonymous donation pulled them from the brink.

The George Tavern has been a Whitechapel favourite for hundreds of years but found a new lease of life 19 years ago when reopened under landlady Pauline Forster in 2002. Located on the corner of Commercial Road and Jubilee Street, the pub and music venue is housed in a Grade II listed building that dates back to the 1600s.

In the past the venue has hosted the likes of Phoebe Waller-Bridge, John Cooper Clarke and Nobel-prize winner Sir Roger Penrose.

I ask Pauline she thinks it’s important that venues like the George Tavern have a presence in the community:

“It’s a birthing ground for all those young musicians who need to start in life with their music careers” she says.

Some of Pauline’s favourite examples include Phoebe Waller-Bridge, M.I.A, and Plan B. Both her and Events Manager Francis Albrecht feel that the importance of cultural venues like the George isn’t properly recognised by local or national government.

“Britain’s cultural export is one of its biggest, most profitable things” says Francis, “if you didn’t have little venues like this, you wouldn’t have all these amazing bands that we’ve produced.”

To keep the business healthy during the first lockdown, the George began a crowd funder as part of a national initiative by Music Venue Trust. This was as well as running online events to substitute for the pub’s usual 7-day-a-week lineup.

“I did about three months of bookings from December 2019 to March and then I had to come up with ways to do the same things but online” says Francis, “I did a livestream every day for a month.”

In three months, the crowd funder had amassed a respectable £3000 from many small donations. Then, on June 27th, an anonymous donation of £10,000 appeared. “That basically saved us” says Francis.

Pauline reveals to me that this donation came from Phoebe Waller-Bridge herself. Now an acclaimed actor and writer – not to mention international celebrity – Waller-Bridge performed some of her earliest work at the George.

For years, the George has fought widely-publicised battles against large developers seeking to transform the land around them. However, when Covid-19 first hit early last year they found themselves thrown into an entirely new fight.

During the first lockdown all staff were placed on furlough, but the sudden dip in revenue took its financial toll. Alongside this, Pauline was living in the building by herself.

“I was here managing everything, and it was quite nice to have the place to myself for a while” says Pauline, “but the novelty wore off and I just found it all quite stressful.”

The situation was much easier in the second lockdown as a sizeable grant from the Arts Council meant the George was able to give all its staff full pay, as well as make a few improvements. These included a revamped sound system, a brand new sign and much-needed toilet repairs. Pauline has also taken the opportunity to complete restoration work on the beer garden space outside, chipping away concrete to reveal the original cobblestones.

Both Pauline and Francis were very excited about welcoming patrons back into the outdoor area and are working hard to prepare for indoor meeting on May 17. They tell me what they think makes the George such a special place for customers:

“It’s a bit like a home from home, it doesn’t have that corporate feel or that chain feel” explains Pauline, “it’s not unusual to see people dancing on tables”.

Francis is similarly enamoured with the venue. “It’s a really beautiful space” he says, “to get to hang out in a centuries old public house with a beautiful cobble garden feels really special.”

Naturally, the whole team is itching to get the George Tavern back into full swing, so there’s no shortage of events lined up. Francis says the shows he’s most excited about are Dan Lyons C U Next Tuesday performance, Pink Eye’s Paradise, and Hard of Hearing.

Details about all upcoming events can be found on the George’s Facebook page.