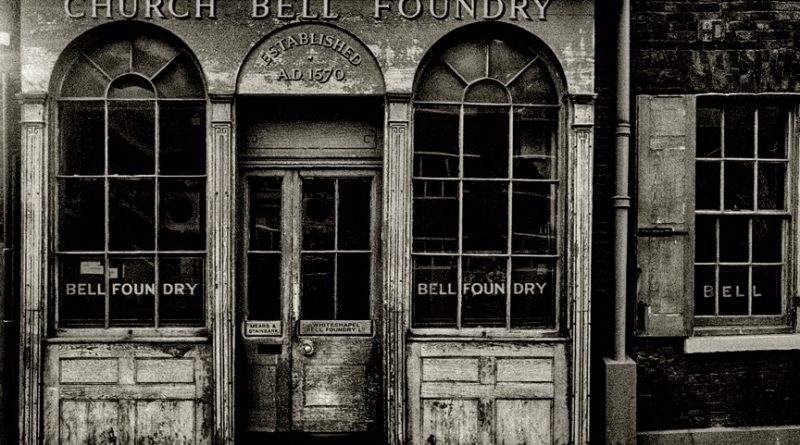 This picture depicts a high street shot of the entrance on 32–34 Whitechapel Road. Although the windows are on display, it seems as though the premise is empty, almost as though nothing exists past the door, echoing its consequential end. © John Claridge, 1982
December 10, 2021December 16, 2021 Gulistan Elidemir 180 Views 0 Comments 4 min read

Remembering the legacy of the Whitechapel Bell Foundry through photographer John Claridge’s photos taken in 1982 and 2016.

The manufacturing of bells at the Whitechapel Bell Foundry has dispersed fragments of Whitechapel around the world and across history.

Through the photographs by John Claridge, the images of the Bell Foundry gives us an insight into the workings of the bell manufacturer and a glimpse of it in its glory days.

Published in 2016, Claridge’s ‘Whitechapel Bell Foundry Book’ features photos that were taken both in 1982 and again in 2016.

His striking style of photography takes us into a feel of old London, even for the photos that were taken in 2016 as if time hadn’t quite passed since 1982.

With the use of black and white film, the photos depict a moody and noir effect due to the heavy contrast. The lack of colour also allows the eyes to focus more on the subject, bringing every element of the image into attention.

As well as this, the images have a strong layer of sharpness, giving viewers the feeling that if they were to touch the image, they might almost touch the real thing.

The pictures are a reminder of industrial London, as the details and noise captured within the photos create a feeling of the grit and the hard work poured into the labour-dominated period.

As Britain’s oldest manufacturing company, the Bell Foundry was founded in 1570 and manufactured bells for historical landmarks including Big Ben, Bow Bells and the Liberty Bell in Philadelphia, USA.

The foundry had closed in June 2017, after the owners announced the relocation of the manufacturer due to a decrease in orders. It was bought by US developer Raycliff Capital in 2019, whose plans are to convert the property into a boutique hotel.

Campaigners had opposed the decision, resisting to keep the Grade II listed building in Whitechapel and maintain it as a working foundry, as opposed to its proposed 108-bedroom hotel containing a swimming pool, café and artist spaces.

Since then, Raycliff, in partnership with AB Fine Art Foundry and the Westley Group, has agreed to reinstate a bell and art foundry in the space of the former historic foundry.

Each of Claridge’s pictures shows us how history was in the making, stapling it into time and space to remind us of the legacy of the Whitechapel Bell Foundry had built. Although it will be transformed and has since moved, the bells it has created will continue chiming in remembrance of yesterday.

Head on over to Cafe Royal Books to purchase the collection of the photos from Claridge’s ‘Whitechapel Bell Foundry’ book.

If you enjoyed this article you may also like to read Photographer Syd Shelton on the vanishing East End.