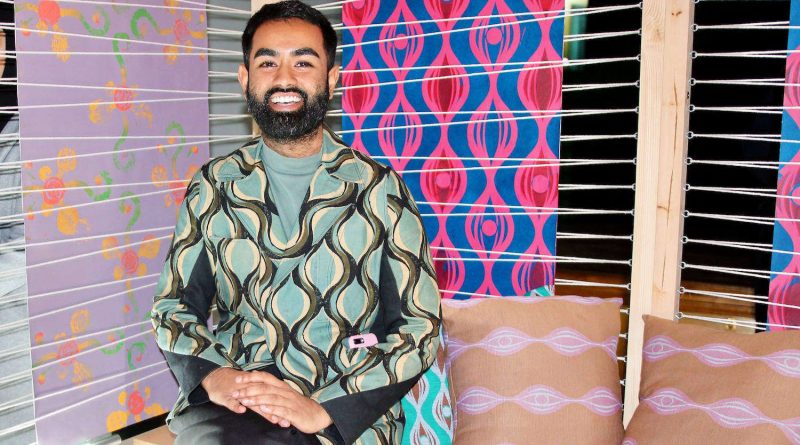 British-Bangladeshi fashion designer Rahemur Rahman’s My Home My Bari exhibition explores the theme of home, what it means to be an immigrant, and building a safe space for younger generations.

How do you return home after you’ve lost one? You build another.

An art installation by local artist Rahemur Rahman, My Home My Bari uses the human senses to build a 1970s British-Bengali home to explore lost identity.

‘When somebody loses a sense of home, they run towards every meaning and every memory that they have of it. And for me, that’s actually what happened. I lost my sense of home and through my work, I’ve been trying to explore what it means ever since.’

Speaking to Rahman, his mellifluous voice matches the delicacy of the installation in focus.

As part of the 50th anniversary of Bangladesh Independence, the Tower Hamlets Council commissioned Rahman to create a collaborative and singular installation with supporting artists.

By using sight, smell and touch, it aimed to transport the viewer to the year 1971 in Brick Lane.

Built upon the premise of celebrating Bangladeshi identity, the foundation is held firmly in place through the collaborative effort of Bangladeshi creatives and community members alike.

‘All of their stories are my story. No one is built sawed off. No one does anything by themselves. They’re built by the people around them.’

Finding the way back home

Having grown up in East London, Rahman, 31, experienced a life of two identities. ‘Being Bangladeshi – I didn’t really even connect the two because, to me, I was just more of a London kid.’

Although specifically from the Isle of Dogs, he spent most of his childhood playing in the Chicksand Estate in Whitechapel where his grandmother lived.

‘My favourite memory of that place is playing in the ghat,’ (meaning ‘bank’ or ‘garden’ in Bengali) ‘It’s made up of a football pitch and playground area, and people used to fight there. I have a lot of good memories of playing football and watching the adults socialise on the side, and as a teenager, I would climb over the gates and watch the area boys huddled up in the middle.

‘Not that that’s like, a really glamorous memory. But that’s something that I think about every single time I walk through Brick Lane and I see the football pitch. I think of the ghat.’

Growing up in a land far away from home, he recalls how distant he had initially felt from the Bangladeshi culture.

‘I used to reference culture in my work before, but it was the culture I had lived through. So like street style, like basically a “gang-gang romance”. That used to be what my work was all about because all I ever knew was poverty.’

A background story that may seem relatable to most young people living as part of a diaspora, Rahman’s parents had encouraged him and his siblings to assimilate into society, in hopes of ensuring a good future for them.

It wasn’t until the Rana Plaza incident in 2013, where a garment factory in Bangladesh’s capital Dhaka had collapsed due to structural failures, that Rahman understood the importance of being informed about one’s heritage and background.

‘I was in university then and people kept asking me questions about Bangladesh, and I knew nothing. I decided to research more about it and that has opened up the cave that I’m in now, in which my work is all completely about Bangladesh. When I started to immerse myself into the culture more I had a big conversation with myself about ‘am I appropriating a culture that I haven’t lived through?’

As a graduate of Central St. Martin’s and a mentee of the council-run ‘A’ Team Arts programme, his work combines fashion and textiles with his heritage to redefine the concept of ‘Made in Bangladesh.’

His portfolio of experience at the AW19 presentation at London Fashion Week Men’s and International Fashion Showcase in 2019 drew the council to Rahman.

‘I’m almost like a vessel,’ he says humbly, explaining how his role was to pull together the efforts of behind-the-scenes collaborating members from the British Bangladeshi community.

As part of the wider exhibition, the surrounding walls of the hall displayed portraits of Bangladeshi business owners found in Brick Lane’s Banglatown, who shared stories of their experience in Bangladesh and building a new home in the UK.

‘Two of my family members were fighters. I’ve heard stories from my dad as well. The war was horrible. A lot of mothers and sisters lost their children and husbands, and some were violated. This has all passed. Now it’s 100% my country and your country. I love Bangladesh,’ tells the story of the shop owner and chef Atik of Graam Bangla.

My Home My Bari was intended to create a safe space to learn about the Bengali culture while simultaneously recognising the events that took place in 1971.

‘Through my work, I use physical senses to pull people into memories, because emotion is the driving force behind a lot of anything that we all do as humans,’ emphasises Rahman.

The first sense that meets you as you walk into the exhibition hall is the scent of incense burning, as your eyes are drawn to the installation room featuring damask wallpaper prints lit up in the centre of the room. As you draw closer to it, you can glide your hands on the shimmering smooth bangles hung from the top of the foundation and the texture of the designs printed on the wallpaper.

The urge to explore the theme of home is often prompted by feelings of estrangement and isolation. It is in the absence of home that leads the way back to it.

Balancing two sets of different identities can be a strain as it makes it twice as hard to be seen or heard in a society that is comfortable with having only one.

For Rahman, being the child of an immigrant was something he found hard to accept at first. However, by delving head-first into topics of racial division, it has helped him find self-acceptance and a maturity that belies his age. ‘When I was young, it was something that I was ashamed of. And now that I’m older, it no longer is,’ he reflects.

It is a common saying that ‘immigrant families have to be better,’ alluding to the need to have to work twice as hard as their counterparts. However, Rahman’s main driving force is working hard so the younger generation has it easier, as reflected by his work as a teacher working with young artists.

‘I’m waiting for the day when a young Abdullah, Mohammed or Anisa is going to do some art projects about their love of flowers. And it has nothing to do with their religion or their identity. This is why I do what I do. I want to slowly build a roster of young people that anyone can tap into.’

To those who experience the same troubles, his advice is ‘Find your community, I think that I’m only as strong as the people around me,’ – a testament to both his strong will and the power of community.

If you enjoyed this article you may also like to read A trip to keep Banglatown alive.

My Home, My Bari: Rebuilding the loss of home through community

My Home, My Bari exhibition: Celebrating the British Bangladeshi experience in London