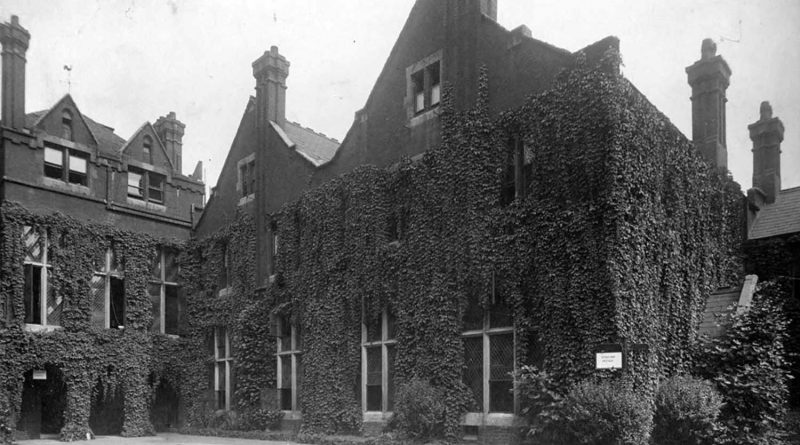 As one of Tower Hamlet’s oldest serving charitable institutions, Toynbee Hall is the grande dame of the borough. Their mission? To help people and communities break down the barriers that trap them in poverty. Currently undergoing a significant regeneration of the site they have been in since 1884, Toynbee Hall is expanding to continue supporting the growing needs of our local community. While the regeneration is underway, Toynbee Hall has temporarily relocated to 52 Old Castle Street, but will be returning to it’s home at 28 Commercial Street when the project is finished.

Toynbee Hall was created in 1884 by visionary philanthropists Samuel Barnett and his wife Henrietta in response to a growing realisation that enduring social change would not be achieved through the existing approaches.

Long before mentoring and social enterprises became the rage, Barnett had the radical vision to create a place for future leaders to live and work as volunteers in London’s East End, bringing them face to face with poverty, and giving them the opportunity to develop practical solutions that they could take with them. Many of the individuals that came to Toynbee Hall as young men and women – including Clement Attlee and William Beveridge – went on to bring about radical social change and maintain a lifelong connection with Toynbee Hall.

Barnett hoped to establish a University Settlement in East London, where a small community of ‘settlers’ could live and work amongst the local people. The settlers were resident volunteers who lived at Toynbee Hall, the vast majority of them Oxford students or graduates, and many of them drawn from Balliol College where Barnett had developed close connections.

In its simplest sense, Barnett saw the settlement as ‘a means by which men or women may share themselves with their neighbours’ and historians have suggested that, in describing Toynbee Hall as a ‘settlement’, Barnett was trying to emphasise its local roots and the commitment of its residents to serving the local community. Settlements based on his model have been established all across the world, in places as diverse as Tokyo and Edinburgh.

The future French Prime Minister, George Clemenceau, described Barnett as ‘one of the greatest men [he] met in England’ and, in 1913, in recognition of his tireless charitable work, as well as his experience as a cleric, Barnett was appointed sub-dean of Westminster Abbey.

Barnett and his wife Henrietta had first arrived in the East End in 1873, when Samuel became vicar of St Jude’s Church in Whitechapel. Census records showed that, at that time, most families in the parish lived nine or ten to a property. The Bishop of London described it as ‘the worst parish in [his] diocese’ and warned Barnett that it was ‘inhabited by a mainly criminal population’.

Undeterred, Barnett, who was Oxford educated and had turned down a comfortable living in a small Oxford parish to come to St Jude’s, spent the next ten years living and working with local residents. Eventually though, faced with a dwindling congregation and disillusioned with the methods of the established church and what he saw as its inability to connect with, or offer effective help to, his impoverished parishioners, his thoughts turned to a new kind of social enterprise – a settlement which would allow a small group of educated resident volunteers, with a range of skills, interests and religious beliefs, to live and work amongst the poor of the East End, sharing their skills and experience with the local community, and learning from it too.

Toynbee Hall works to provide a voice and support for people who might be financially or socially excluded. They also undertake research and campaign to help influence thinking and policy on long-term solutions to poverty.

There is a wide range of community projects taking place at Toynbee Hall to ensure that they are manage to reach even the hard-to-reach communities, from the young to the old, from women-only groups to heritage projects. Many have an emphasis on peer-to-peer support. Their Community Money Mentors programme, provides a peer-to-peer programme providing support with managing finances.

Toynbee Hall also conducts peer-led research in the community to make sure that the services they offer are representative of what people need. Daniel Bunn, Head of Research, Evaluation and Learning, explained ‘It’s essential to engage with people who are not currently engaging. Doing this allows a real understanding of a whole community rather than just a snapshot.’

History has given Toynbee Hall a well-respected name, and its services still have far-reaching impact. Over 20,000 people engage each year with the London-wide debt service that Toynbee Hall help run.

The future for Toynbee hall

The exciting plans to regenerate the Toynbee Hall Estate began in 2013 as the Grade II listed Toynbee Hall itself had fallen into a state of disrepair and was at risk of being lost forever. The estate was also struggling to meet the rising demand for services. The redeveloped estate will enable Toynbee Hall to expand their services from supporting 14,000 at present, to supporting 20,000 people each year after redevelopment.

The regeneration will conserve the original Toynbee Hall and courtyard, reinstating its original glory and sharing its rich history to inspire a new generation of social activists. It will also create purpose built spaces for our advice and wellbeing services.

Mallon Gardens will be redeveloped as an accessible community garden space and space will be provided for venue hire and commercial office space, enabling them to generate revenue to support their charitable services.

The Grade II listed Toynbee Hall is being developed into the Centre for Heritage and Learning, giving new life to historic spaces that have fallen into disrepair. The Centre and its courtyard will be a space for people from all across the community to learn, be inspired and take action.

The redevelopment is expected to cost £17million. Toynee Hall has sold some of its assets and secured some Heritage Lottery funding, but they need further funding to be able to meet the project deadline of 2019.

Throughout the history of Toynbee Hall, there have been some pretty important people involved with it’s work. One of the most integral to its development was Jack Profumo.

John Profumo – Jack as he was known to his friends – started at Toynbee Hall as a volunteer in 1963 and continued until his death on 9 March 2006. During his time at Toynbee Hall, he raised funds for multiple projects and left a lasting mark on the organisation.

Just some of the amazing things he was responsible for –
· Establishing Child Poverty Action Group in 1965.
· Setting up of Workers’ Education Centre in 1965 for Asian and African immigrants.
· In 1967 started appeal for modernising the buildings on Toynbee Hall site.
· It was John Profumo’s idea that Attlee House be built on the site of the old library as a memorial to Clement Attlee.
· In 1968 John Profumo became a visitor at Grendon Psychiatric Prison, creating a link between Toynbee Hall and former inmates at Grendon.
· The Special Families Centre for the Mentally Handicapped opened in Sunley House in 1974.
· In 1975 John Profumo was awarded the CBE for his charity work.
· A Radio Appeal of 1978 brought in a phenomenal £35,000 for Toynbee Hall.

Donate or volunteer at Toynbee Hall

Not everyone can give as much time as the legendary Jack Profumo but there are little ways of supporting Toynbee Hall that can make a big difference.  Toynbee Hall have many volunteering opportunities or you can donate online or by text.

Tabitha Stapely is the founder of Social Streets, a not-for-profit media company using journalism to strengthen communities, particularly those in disadvantaged or neglected areas. Prior, Stapely was a writer and editor for national titles including The Telegraph, Elle and Red magazines.