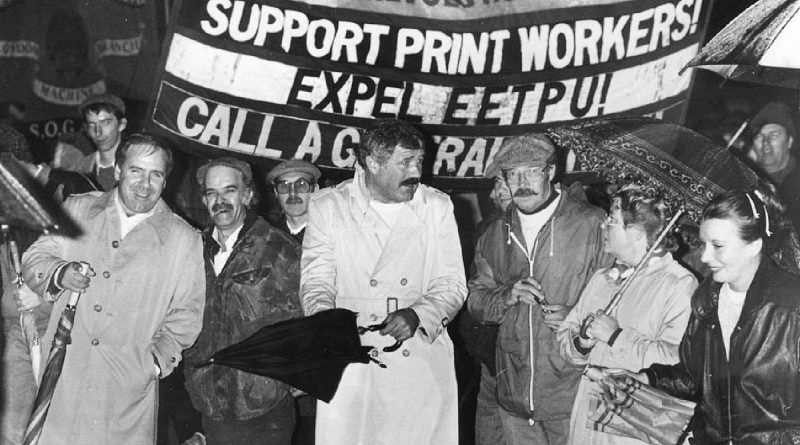 In 1986 Wapping was transformed into a ‘mini police-state’ when it became the arena for a monumental political struggle known as the ‘Wapping printers strike.’

Looking out at the tranquil Thames from any of the district’s waterfront boutique restaurants and bars, one may find it difficult to envisage Wapping as a scene of mass disorder.

But in 1986, this small area of land on the northbank of the Thames became the setting for an often violent conflict between Rupert Murdoch, with the backing of then Prime Minister Margaret Thatcher’s police force, and 6,000 print union workers.

On the 24th of January, 1986 Rupert Murdoch made 6,000 workers redundant by moving production for his media News International conglomerate, which produced papers such as The Times and The Sun, from Fleet Street to a new plant in Wapping.

To protest their redundancy, the print union workers organised pickets on Virginia Street, aiming to block distribution of the newspapers, as well as mass demonstrations which usually converged on The Highway in southern Wapping.

The worker’s pickets often ended in clashes with police, and Wapping became host to some serious violence, with over 1200 arrests made and over 500 police suffering injuries during the strike.

On the 5th of February 1987, the strikers were eventually defeated, the workers having failed to stop a single night of production.

Murdoch, owed his victory to the support of the anti-union policies of Thatcher who was at her zenith, and who deployed a large-scale police operation to ensure the plant could operate effectively.

Much has been written on the ramifications of the strike; how its failure led to the adoption of modern printing practices, the demise of the Union as a powerful force in British politics, and the bolstering of Murdoch’s media empire.

However, there has been little discourse about how Wapping’s community life suffered during this landmark ideological battle.

Community life in the ‘mini police-state’

In 1986, Wapping was still a largely working-class community and home to 3,500 people. It was transformed into a ‘mini-police state’, as Thatcher sought to defeat the unions which she called, ‘the enemy within.’

Throughout 1986 and early 1987, the police regularly set up roadblocks across a wide area of up to a mile from the News International plant. The roadblocks effectively sealed off the Wapping area so that cars could only come through one entrance from Tower Bridge.

Trade was strangled in the area with pubs, clubs, restaurants and taxi firms reporting massive losses of earnings, and fears of loss of trade.

Local residents in cars and on foot were regularly stopped throughout the week, sometimes several times a day. Residents reported losing hours trying to get home with the roadblocks in place.

The bus service into Wapping was also restricted, further exacerbating the isolation of the community.

There were several reports of cars being moved without the owners permission to ensure News International lorries could bypass pickets. There were also reports of bumpers being ripped off as cars were towed away to accommodate the lorries.

However, one of the biggest sources of concern among local residents was the speed at which the lorries left ‘Fortress Wapping.’ Locals reported lorries thundering down narrow side streets, driving over double the speed limit in their efforts to avoid disgruntled print union workers.

The life of one member of the community, Michael Delaney, was tragically lost in the dispute, the young man was killed by a speeding lorry carrying the papers of Murdoch. The killing was deemed unlawful by the coroner jury’s verdict but no action was ever taken.

The National Council for Civil Liberties (NCCL), after receiving a litany of complaints, set up an investigation to examine the impact of the policing of the dispute at News International on the community. The report found that the police’s actions were ‘manifestly oppressive’ concluding that they had been ‘unlawful’ in restricting freedom of movement.

According to the NCCL report, police gave priority to ensuring the passage of News International lorries rather than protecting the rights and safety of residents.

It was not just Wapping’s people, but also its historic face that was to be an innocent victim of the dispute.

Wapping High Street was described by the chair of the London Docklands Development Corporation (LDCC) as ‘one of the most fascinating streets in England.’

Despite the chairperson’s assertion, and against the advice of an inspector who had conducted a public inquiry into the area’s development, the LDCC proposed to widen the high street. This proposition would ‘destroy its character’ according to local historian and lifelong Wapping resident Madge Darby.

It later became clear that the high street, despite its historical importance, was being sacrificed to provide space for a backdoor out of ‘’Fortress Wapping’’ so that Murdoch’s lorries could avoid pickets on Virginia Street.

By May, anger was mounting among the people of Wapping who decided to hold a march to News International and hand a petition to Rupert Murdoch ‘for being a bad neighbour and bringing all the police down Wapping.’

570 locals, almost 1/5th of Wapping’s population, marched peacefully to the plant, led by a labour MP and two vicars.

However, their efforts were essentially fruitless and the waterfront district remained a battleground for print workers, and a police force often described as ‘hostile’ by local residents.

In early February 1987, the strikers were defeated, bringing one of Britain’s most protracted and militant industrial disputes to a close and allowing daily life in Wapping to return to some form of normality.

But for the year of 1986 Wapping was another community sacrificed on the altar of Thatcher’s anti-union policies.

The march to ‘Fortress Wapping’ was the last stand of working-class Wapping. The community was soon to be displaced by skyrocketing house prices aided by the neglect of a council that Madge Darby lamented, ‘could not understand the deep feeling of belonging of people who lived where their ancestors had lived.’

Walking through Wapping now, deluged in office blocks of towering glass, trendy bars and luxury apartments, the area looks like it could be a waterfront district in any major Western city. One could be forgiven for not noticing the ghosts of a working-class community that haunt its every corner.

If you enjoyed reading this you may also like our story on the university teacher strikes.