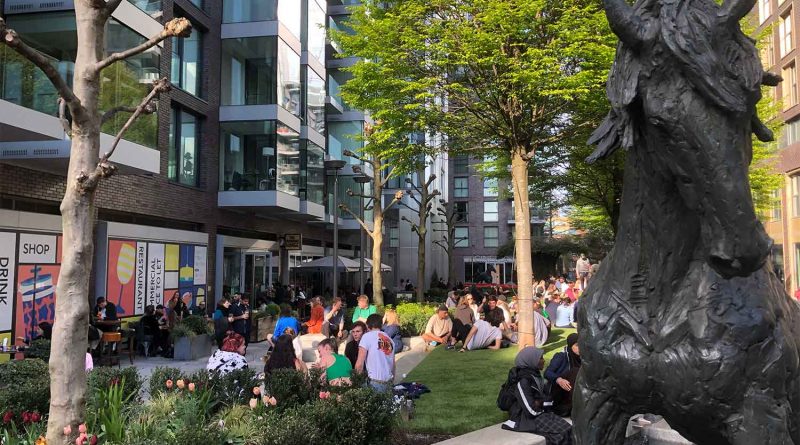 With beer gardens across the UK reopening last month, we set about finding Whitechapel’s finest spots to have a refreshing outdoor drink.

Whitechapel is home to some of London’s most interesting pubs. Unfortunately, before 12 April all hospitality venues had been shut for almost an entire year. This has taken a massive toll on the sector, especially independents, with closures all over the country. Oftentimes, those that have managed to stay open have done so at massive financial loss.

Needless to say, pub owners are glad to be back – and we are very glad to have them back. To celebrate the limited return of our pubs, we ventured across Whitechapel, visiting a selection of the beer gardens on offer.

For those from outside of Whitechapel, this is likely the first pub that comes to mind. The Blind Beggar accommodates a mix of patrons from near and far, relying on its status as one of Whitechapel’s most heritage-rich pubs.

I’m told by a manager that the popular pub has taken the opportunity to renovate its beer garden over lockdown. This large, secluded area is only accessible via the venue, with tall walls on two sides and tall buildings on the other. An artificial hedge divides the brickwork garden down the middle, a canopy covering the near side. In the far corner stands a flashy patio area, with underfloor lights and a separate bar, serving the beer garden alone.

There’s not a spare table to be seen on this Monday afternoon. Customers of all ages can be found soaking up the sun and enjoying a draught beer. I speak to a group of lads at one table who all met at university in Brighton and come from all over London. They’ve not seen each other once for over a year and were very excited to be reuniting over cold drinks on the sunny day.

Departing from The Blind Beggar, I had a long walk ahead of me. Turning left out of the establishment, Whitechapel Road stretches ahead of me, the bustling market extending seemingly endlessly into the distance. I head on through, trying my best to weave down the narrow and crowded passageway.

Questionable social-distancing adherence aside, this is always lovely walk; it gives you a taste of what Whitechapel’s all about. If you visit Whitechapel Road on a Sunday when the market’s not on, it’s striking how much bigger – and how much more lifeless – it feels.

Eventually, I make it to Altab Ali Park. One left turn and a brief walk down White Church Lane and I find myself at my next destination.

This small pub is easy to miss. You’ll find it tucked away on the short stretch that connects Whitechapel Road and Commercial Road, flanked on most sides by much taller and much flashier buildings. Contrasted to the modern, clean-edge architecture that surrounds it, The Bar Locks looks like a living piece of history.

To put it plainly: it looks a bit out of place. However, this pub far outdates its neighbours and there is a real charm in its ardent commitment to maintaining its identity.

Their beer garden is new, so to speak. A roughly cut piece of astroturf has been spread over the cobbles of Manningtree Street, creating a fairly sizeable, if slightly dim, area to enjoy your drink. There’s a mixture of customers in the garden, no doubt having found The Bar Locks not long prior on Google Maps.

Congregating along the side of the building are groups of older men, all with strong East London accents. These blokes banter with the landlady as she pops in and out of the pub, laughing loudly. A couple of them dubiously agree to talk to me and have their picture taken. With not too much emotion, they express that they’re happy to be back. It becomes clear that for them it’s more than just a cold pint they’ve been missing for a year – it’s an entire community.

It’s not a long walk to this next beer garden, but the city changes in an instant between the two.

I hop from Commercial Road to Leman Street via the Aldgate East junction. Standing on this busy corner and looking from left to right, it’s like there are two different cities on either side.

On the one side you’re peering into Aldgate, where an eclectic mix of blue and silver buildings block the sky. On the other, Whitechapel, its buildings five stories at most and coming in hues of red, brown, white and gold.

I go straight ahead along the dividing line, Leman Street, and it’s not long until I come across The Running Horse.

Sitting on the edge of Whitechapel, the Running Horse is a trendy pub facing a square called Piazza Walk. Handily, the square also acts as the pub’s beer garden. It’s quite sizeable and completely accessible.

As well as a few tables outside of the pub, the main seating is the small green area on the square. This is made of artificial grass, precisely sliced to fit the confines of raised, angular spaces. Adjoined to this is a pretty water feature, looked over by two large and imposing iron horses. On its north and south sides, very tall office and flat blocks loom over the square causing it to be somewhat claustrophobic. It’s eastern side has a clear view of the sky however, so it’s not too dim. The clientele is almost entirely young, and fills up every inch of the square’s seating areas.

Sitting and watching passers-by in this part of Whitechapel – although I’m sure many would argue I’ve crossed into Aldgate here – it’s a very different picture to the other beer gardens I’ve visited on my search. A lot of men in business suits and young people in designer clothing glide by, for the most part heading deeper into the grey, industrial heart of London, rather than into the East. Looking at the cranes looming overhead, I wonder if it’s inevitable that the endless big-money developments will seep further and further into this part of the city. I like to think the strength of the community, which is on full show in pubs like the ones I’ve visited, means that isn’t true.

I decide to stop here – not least because I’m now three pints and a mile in – and conclude my search.