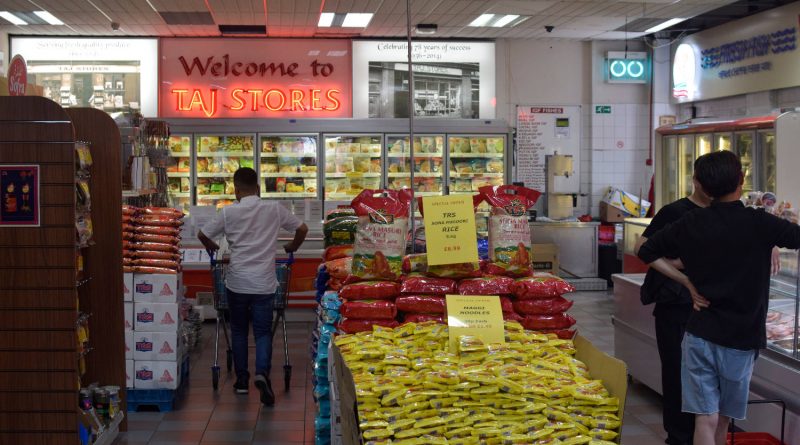 Just south of the Truman Brewery bridge, amidst a forest of curry houses, stands the imperial red and white shopfront of Taj stores.

Walking through the entrance of this storied establishment you are confronted by a vista of colour, and the fragrant redolence of the fruit and vegetable section, with its fresh produce stacked tight on shelves that stretch the length of two walls.

The diversity of the shop’s selection is remarkable; Kashmirian fizzy drinks, Himalayan beauty cream, and huge sacks of rice, sit alongside typical western products such as Daz and Coca-Cola.

Browsing through the shops aisles, awash with the smell of turmeric and chilli emanating from the large industrial sized boxes of spice at back, you are likely to find whatever it is you have come for.

Manned by Muhammed, the butcher’s in the back, sells a litany of fresh cuts of halal meat. The fridges are also brimming with fish, a staple of Bengali cuisine, and you can get Boals weighing up to 3kg, as well as a vast selection of frozen fish, all at an affordable price.

The shop is located at 112 Brick Lane, a cornerstone of Brick Lane and a vital part of the complex ecosystem of its Bengali community. As well as providing fresh, difficult to source Asian produce to individual members of the community, it provides the curry houses that line the southern end of Brick Lane with vital ingredients for their famed currys.

The shop is owned and run by three brothers, known as Jamal, Junel and Joynal, they are the third generation of their family to run the store. Their great uncle, Abdul Jabber, opened the shop in 1936, running it with his Irish wife, Cathleen and it is now London’s longest-running Asian greengrocer.

He was a seaman from East Pakistan, who had left the navy in 1934, and then briefly worked as a textile worker in East London.

When Abdul Jabber passed away in 1969, ownership of the business was transferred to Alhaj Abdul Khalique, the father of Jamal, Junel and Joynal. Their father then too passed away in 1996, and the reins were passed to the three brothers.

The shop is widely renowned for its massive selection of Asian food products; TV chef Jamie Oliver numbering it among his favourite stores.

Its shelves stock over 1,000 items from all over the world, importing from Bangladesh, India, China, Greece, Lebanon and Jamaica as well as numerous other locations.

It is these independent family run shops that activists and locals feel may be under threat of disappearance in the wake of the controversial Truman Brewery Development’s approval.