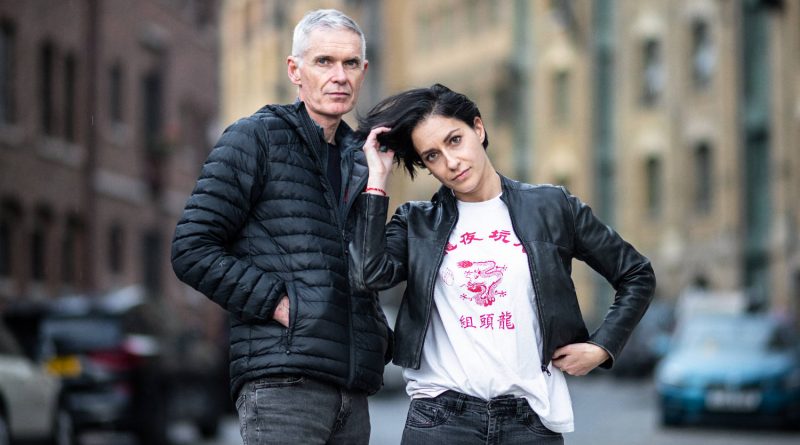 We speak to the father and daughter duo behind GET OFF THE BALCONY exhibition about cabin fever, trauma and their upcoming exhibition, which was borne from a battle with illness in the confines of a flat in Wapping.

John and Natasha Flint sit beside one another on a dark blue couch, in front of a polychromatic abstract painting of Natasha’s, in the sitting room of her flat.

They share a strong father-daughter bond, inhabiting the same plain of thought, sharing jokes and expanding on one another’s ideas as the conversation flows.

They are both artists who at the time of our interview, were preparing for their first exhibition together.

John, who earns his living as a painter, spends most of his time in Anglesey, in the mountains of North Wales, where he is from and has a studio.

Natasha, a full-time lawyer, has been based in Wapping for the last 5 years.

John often speaks of himself in the 3rd person, as many artists who often feel themselves observers of life instead of participants, do.

John’s mother was an artist, so he grew up ‘’…naturally thinking, this is what you do.’’

Natasha’s interest was also passed down from the previous generation. She can remember, ‘’art being a part of my life from when I was very little… I had a crazy knowledge of classical paintings by the age of 6.’’

Although art has always been there for the both of them, they allude to the fact that certain events, in the year before lockdown and in the lockdown period itself, whetted their appetite to paint, catalysing a dramatic increase in their output.

Later on in the conversation I learn that these events were in fact a confrontation with the potentiality of death.

Natasha was diagnosed with breast cancer, ‘‘out of the blue’’ the year before lockdown began.

‘‘There was a lot to deal with and I spent the best part of two years in treatment. It was chemo, then surgery, then it was radiotherapy.’’

After being informed of her illness, John came down to live in Wapping to provide support for his daughter. She had all her treatment in London, so they were together in East London throughout the illness.

These events, and the art made in this period will culminate in the upcoming exhibition.

‘There was an awful lot going on’ John tells me, ‘’and also a lot of time that I thought I just need to get out of her way.’’

Johns’ recognition of needing to give Natasha her own space as well as their general behaviour toward one another, how they listen intently to what the other is saying and pick up on one another’s ideas and expand them as the conversation unfolds, gives one the sense that they have a close, shared subconscious understanding.

In these times when he felt that ‘‘he needed to get out of the way’’ he just ‘’started to walk around London.’’ A London that he ‘’didn’t know at all’’ and that he hadn’t spent much time in until that point of his life.

These walks of escape in the throes of lockdown acquainted him with the city which he now ‘’knows quite well.’’

‘’I just walked and walked, from East to West to North’’ where he was constantly struck by the sights of the then dormant city.

‘‘You’re walking around seeing things and you think what you’re painting is simply what had struck you on your walks, but of course you’re doing it in a context of the events unfolding in your life and these events are subconsciously informing the art.’’

Consequently, he looks at his work from that period and now thinks ‘‘oh god’’ as he now notices some of the glass and steel structures he painted appearing ‘’with a certain ominous property’’, haunted by a shade of his daughter’s illness.

John’s work, some of which portrays the glass and steel towers of Aldgate and Canary Wharf, is manichean, portraying stark oppositions of light and shadow.

Seeing the new superstructures, which predominate places like Aldgate East and Canary Wharf, alongside older architecture, made a lasting impression on him. He noted that in the juxtaposition of these glass giants and ‘’the decrepit skeleton of the former gasworks or ancient cranes…’’ he found, ‘‘a real tension’’ which was conducive to creativity.

This interest in stark contrasts is also an artistic concern of Natasha’s.

The black and white portraits she paints, with the thick black lines, are reminiscent of some of the early avant-garde agitprop of the USSR.

She began painting them in her mother’s house in Lincolnshire and only afterwards did she see parallels with other artists.

She realises now that she was ‘’subconsciously influenced by calligraphy, Asian art, sweeping strokes, starkness of black and white, interactions with concepts like Wabi-Sabi – what is this painting, what is it not? Is it finished, Is it unfinished?’’

Perhaps their work’s concern with stark oppositions, in a period of strife, came from their reckoning with the other side and having to contemplate the two most disparate state’s that there is, life and death.

John explains how they, ‘’both went through this 2 year period where we were just randomly producing stuff, and after it we realised, hang on, there is a peculiar coherence here… we’re both portraying in different ways the same experience’’ – ‘’although we didn’t recognise that at the time’’ Natasha adds, ‘‘looking back on it, it seems clear.’’

But painting was not a form of therapy for either of them during this two year period of illness, but instead, according to John, simply an imperative, ‘’Theres nothing else I can really do here.’’

Nathasha picks up her father’s thought and stretches it, ‘’that’s where the ‘in response’ part of the exhibition title comes from’’

John expanding further on the idea details how, ‘’The paintings are created in response to trauma, that’s the title of the exhibition that’s what it’s about. At the time I didn’t recognise that, but looking back for sure, the both of us created work which was very much a response to what was unfolding.’’

Again Natasha expands the point, ‘’what else were we to do, we are both artists so that’s what we did and that’s what came from it.’’

’GET OFF THE BALCONY: In response to trauma; paintings by father and daughter’ is the full title of their exhibition.

The ‘GET OFF THE BALCONY’ part of the title comes from the cabin fever of lockdown, Natasha explains how ‘’during the treatment things often got stressful, occasionally climaxing in some crazy outburst from me who was going through all of this stuff while having someone else in my tiny little flat.’’

‘‘Essentially there was this moment of me telling him (John) to GET OFF THE BALCONY.’’

‘’You know the person who is here, supporting you all the way through it, you lash out at… that’s why we picked it as the title, as it encapsulates that feeling of there being so much happening all at once and it has to come out in an outburst.’’

Natasha’s playful tone then changes to one of sincerity as she remembers this time, ‘’It was very stressful. It was really a traumatic situation we experienced together.’’’GET OFF THE BALCONY: In response to trauma; paintings by father and daughter’ opened on Friday, June 17th in WappArt, and was scheduled to run until the 30th, but has closed early.

If you liked reading this you may also like reading about the Wapping printers strike.