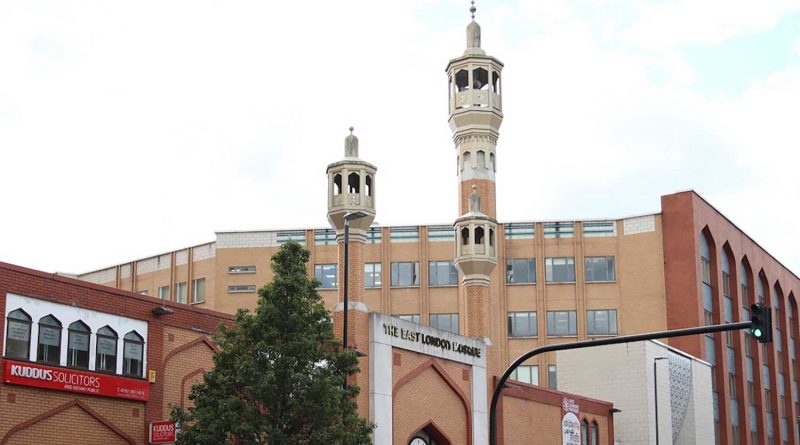 Being home to the famous East London Mosque, mosques in Whitechapel contribute to the area’s diverse urban architecture.

Whitechapel is home to the largest community of British Bengali citizens in the country, according to the 2011 Census. Creating a cultural hub in the area since the 1970s, the influence of the Bengali community can be seen in its many mosques, also known as masjids.

Some mosques have been ingeniously adapted from former schools, community centres and even churches and shops. Others have been purpose-built and feature the signature flourishes of the Islamic faith: domes, minarets, and storey-spanning arched windows. All contribute to the melting pot of Whitechapel’s gloriously diverse architecture.

Sited on Whitechapel Road, the East London Mosque was built in 1982. Its towering architecture topped by a dome and minarets is one of Whitechapel’s most familiar landmarks. The mosque was one of the first in the UK to be allowed to use loudspeakers to broadcast the adhan. Combined with the adjoining London Muslim Centre and Maryam Centre, it is also one of the largest mosques in Europe.

Found on one of Whitechapel’s busiest streets, this fascinating building can be found amid the curry houses and storefronts of Brick Lane. Housed in a historic Georgian building, this mosque once served as a French Protestant Church and a Synagogue reflecting the waves of immigration in the neighbourhood of Whitechapel. The mosque can hold up to 3,200 and is most crowded during the jummah (Friday) prayers, which are held on… Friday.

Located on Toynbee Street, the BBC Community Centre Mosque (not that BBC) is an example of one of the mosques in Whitechapel that functions as a community centre too. Its distinguishing features include contrasting brickwork and circular windows, an architectural feature found on many mosques.

The gold lettering down the side of this mosque lights up at night, guiding people to prayer. Open since 1980, this mosque on Christian Street is one of the most well-established in the area. Can you spot the two minarets on each corner?

Darul Ummah Masjid occupies a former Church of England Victorian school premises. It has kept its educational purpose and is now an independent boys’ secondary school combining the National Curriculum and Islamic Education.

Also known as the Ford Square Masjid, due to its location on Ford Square, this mosque is known for its high-quality Arabic language and grammar education. It was founded in 1983 and gained popularity in the 1990s for its famed maktab (evening school) services among the borough.