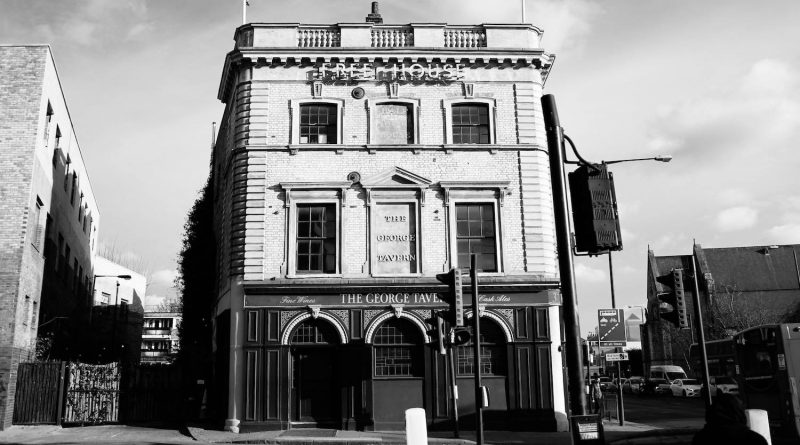 Predating the East End itself, The George Tavern’s centuries-old reign evolved from an inn to one of London’s most important music venues

Despite its unlikely location on Commercial Road surrounded by wholesalers and ribbon development, The George Tavern is one of Whitechapel’s most well-known – and cherished – venues.

The grand three-storey Georgian building stands handsomely on the corner of a junction, complete with parapet and cornerstone detailing. Thankfully it survived the Blitz better than its neighbours and the result is uninterrupted views and light from all its tall windows.

Retaining some evidence of its 17th-century origins, the building received Grade II listing in 1973 in recognition of its long history and architectural merit – indeed, it’s one of the few landmarks on Commercial Road of any note.

This historic pub has been serving locals and Londoners for centuries but recently it has found new life as a music venue under the management of the current owner, Pauline Forster.

Opening its doors to lovers of music, performance and arts, the pub has become a popular location for photo, film, and video shoots while, rather miraculously, still remaining a favourite for the East End pub-goer.

With Forster’s magic touch, the pub has been brought to world attention. You may have got a peep of the George on popular shows such as Netflix’s Sense 8 or have seen a photoshoot of supermodel Kate Moss posing in a ‘Save The George Tavern’ T-shirt.

But fame has never been far from The Tavern. Before becoming a tavern, it existed as an inn called The Halfway House, which was mentioned in texts by Geoffrey Chaucer, Samuel Pepys and Charles Dickens.

Unfortunately, having survived centuries of wars and the demise of the local boozer, The George is now facing new pressures from the redevelopment to the surrounding area. Can it survive another 400 years?

The George Tavern when it was the Halfway House

The George’s history dates back to the turbulent years of the Restoration period during Oliver Cromwell’s brief reign in the mid 1600s when Charles II had been sent into exile.

Back then it was the Halfway House and was run as an inn, providing accommodation to travellers passing through on their horse-drawn carriages.

Pinpointing the exact date of the inn’s creation is almost impossible. However, the earliest and most reliable mapping of the Halfway House is in surveyor Richard Newcourt and engraver William Faithorne’s An Exact Delineation of the Cities of London and Westminster and the Suburbs dated 1661.

Even now, traces of the inn can be found at the George’s current premise. The space behind the pub, formerly known as Stepney’s Nightclub, used to be a coach house. Forster believes the original use of the building was a short-stay location where travellers could rest and eat.

An image depicting the Halfway House in the 17th century was featured in The Gardeners’ Chronicle from 1918, which shows it to be a sprawling two-storey building set in fields before industrialisation transformed the East End.

Rebuilt during the industrial era

In the 1800s The Halfway House was significantly remodelled to keep up with changing times. The construction of Commercial Road between 1802 and 1806 provided a link for the West and East India Docks to the City of London. Along with new travel infrastructure the East End also saw large scale housing development for factory workers. The orientation of the inn’s building was changed and, with less need to provide accommodation, it changed from being an inn to a tavern.

Richard Horwood’s Plan of the Cities of London and Westminster, the Borough of Southwark and Parts Adjoining Showing Every House suggests part, if not the whole, of the original Halfway House could have been retained and integrated into the new George Tavern.

The building as we know it was built approximately between 1820-1825. It shows the typical characteristics of its Georgian origin, with its graceful architecture displaying symmetrical windows decorated with headers.

The revival of the tavern

Before Forster bought The George in 2002, the pub was in bad repair and property developers were sniffing around with a view to converting it into residential flats.

Forster had no intention of becoming a publican, but something about the George moved her, and she bought the property on an impulse a week after seeing it.

Thanks to Forster’s efforts, the pub is enjoying a new lease of life. It has hosted live performances of many successful bands including The Magic Numbers, an English rock band, the Irish rock band Kodaline, and English performance poet John Cooper Clarke.

Its reputation has attracted names from across the pond. American celebrities Grandmaster Flash, Justin Timberlake, and Adrien Brody have hired the pub as a location for shoots.

Over the last two decades, The George has fought widely-publicised battles against the developer Swan Housing Group, who own Stepney’s Nightclub and the Exmouth Estate, which is adjacent to the pub.

The George first came under threat in 2008 when Swan Housing Group put in a planning application to demolish the adjoining Stepney’s Nightclub building to replace it with a five-storey block.

It was feared that the residential developments around the pub would open it up to the risk of receiving noise complaints from new residents, placing the long-term future of the George as a live music venue at risk.

At the time, famed international stars Kate Moss and Amy Winehouse launched a campaign with other musicians and actors, such as Sir Ian McKellen, to save the venue.

The saga to save the George’s music licence continued into 2014 with the campaign gaining the forces of more celebrities such as model Georgia May Jagger, punk poet John Cooper Clarke and singer Lianne La Havas.

In 2016, the George won its legal battle against Swan Housing Group in a Court of Appeal, which overturned its previous decision that allowed the property developer to build a block of flats on the grounds of the disused Nightclub.

As recent as January, the George made a new appeal to its supporters in lieu of the redevelopment of the Exmouth Estate, which is located behind the pub.

Adding to their challenges, in 2020 the George faced the threat of closure once again, this time from a pandemic. The ensuing lockdowns saw high streets closing down for months on end, causing many businesses to be unable to reopen their doors again.

The shockwaves of this were felt at The George, as all staff were placed on furlough and the sudden dip in revenue took its financial toll on the tavern.

To keep the business afloat during the first lockdown, the George began a crowd funder. They also held online events to substitute for the pub’s usual seven-day-a-week lineup.

In three months, the crowd funder had amassed a respectable £3,000 from many small donations, but then received an anonymous donation of £10,000 that saved the pub at the time.

It was later revealed that it came from the English actress and writer Phoebe Waller-Bridge, who performed some of her earliest work at the George.

Receiving a sizeable grant from the Arts Council during the second lockdown gave the George breathing room and the capacity to make renovations to its premise.

After all of these challenges, the George’s firm grasp on its lifeline continues to show its cultural and historical importance in the creative scene of East London.

While this remains to be true, the challenges the tavern has also endured reveals the growing threat the East End faces from the changing landscape around it.