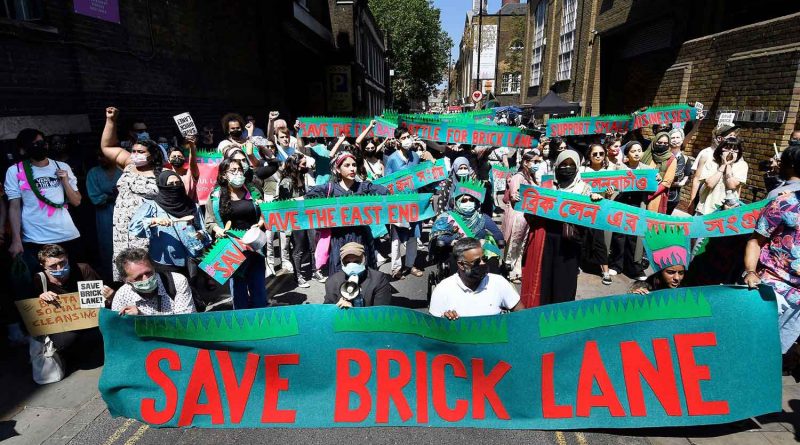 Many see the controversial plans to redevelop Truman Brewery as a significant threat to the long standing Bangladeshi community of Brick Lane.

Over 200 protestors gathered in Whitechapel on Sunday, 13th June to march against the proposed redevelopment of the Truman Brewery, near Brick Lane.

Beginning in Altab Ali Park, the crowd marched through Brick Lane to arrive at the Brewery gates where speeches were given. The event was organised and endorsed by several local community groups.

Leading the charge was Nijjor Manush, a national independent campaigning group which aims to educate and empower British-Bangladeshis in the UK.

This action comes after the controversial redevelopment plans were pushed back in April following mass condemnation from the community. In a public consultation, the Council received over 7,000 objections.

“Today we show the Truman Brewery and Tower Hamlets Council that we will not stop until this development is rejected.”

“The choice before us could not be starker, 98.9% of the public consultation oppose the development plan that the council is seeking to push through. Truman Brewery shame on you!”

Many locals are particularly outraged as Brick Lane is a significant site of cultural heritage in Whitechapel. It is home to some of the longest-standing Bangladeshi-owned businesses in the area.

In the 1970s, the southern portion of the street was renamed ‘Banglatown’, marking it as a hub for Bangladeshi culture in the East End. At one point in the early 2000s there were over 60 Bangladeshi-owned curry houses on the street. In 2020, only 23.

Most analyses, such as the 2020 “Beyond Banglatown” study, attributes this decline to gentrification. This is a process whereby residents and local business owners – many of whom have been in the area for decades – are priced out by an influx of expensive, usually corporate-owned businesses.

Many locals and residents consider the proposed Brewery redevelopment as a quintessential symbol of this process. They believe it is likely a death knell for the independently-owned Brick Lane businesses that still remain against the odds.

Dr Fatima Rajina is another co-founder of Nijjor Manush whose academic research focuses on British Bangladeshi Muslims. Writing for Amaliah magazine she describes the redevelopment plans as “social cleansing”, arguing:

“If this development goes ahead, we will not only see drastic changes to the lane that will inevitably push out the local communities”.

“It will further highlight the absolute need to resist such greed and capitalist tendencies to shape the city”.

It is as of yet uncertain whether or not the proposed redevelopment will go ahead. For now, the Whitechapel community is making clear to the council and would-be developers that it won’t be without a fight.

If you want to learn more about Whitechapel’s British-Bangladeshi community, you might like our guide to local events being ran to mark 50 years of Bangladeshi Independence.

From 1978 to Today: Whitechapel’s Fight Against Racism